Rosalie Engels is a German student in her third year of European Studies from Trinity College. She is currently on Erasmus in Italy where she observed a different perspective about the European Union. 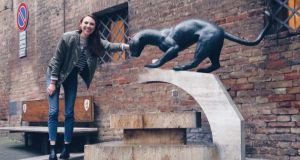 Rosalie Engels: People in Siena have a very different view of Europe

One of the advantages of going on Erasmus is that you have flexibility in what you study - you can dabble in one or two things that aren’t necessarily related to your course.

The majority of Rosalie’s classes are politics-related with one art history class thrown into the mix.

Administration is slow in Siena and as Rosalie herself put it: “you queue and you queue only to find out that you’re in the wrong queue, even though everyone else in the line seems to have the exact same question as you”

Examinations are  typically taken viva voce - or orally - in Italy, meaning that for non-native Italians, exams can be that extra bit challenging. To make matters worse, some are taken in front of the entire class - which in some cases could be up to one hundred and fifty people.

Students in Siena don’t seem to enjoy their courses as much as students elsewhere. "In Siena it’s more accepted to say that you don’t enjoy studying or enjoying attending lectures", she said.

“People here just seem to pick something that they could maybe see themselves doing”.

Youth unemployment is high in Italy at 38 per cent and Rosalie believes it breeds a mentality where people know that they have to go to college but then they don’t necessarily expect to work in the field of their degree at all.

The View of Europe from the South

An interesting perspective, coming as it does from a student of European Studies.

She said she was glad that she was seeing this different perspective and it’s true that if you always surround yourself with people who think the same way as you it’s harder to question your own beliefs.

She maintains that had she not gone on Erasmus she wouldn’t have questioned the way she thought about the European Union.

Going on Erasmus while already being an ‘international’ student in Ireland

I asked Rosalie if she was treated the same way when she first moved to Trinity as an international student and when she moved to Siena as an Erasmus student, "When I moved to Trinity I was immediately immersed by Irish students".

She talked about the temporary quality of Erasmus saying, "when I first came home after I moved to Dublin, I was already referring to Dublin as home in Germany. I haven’t felt like that with Siena though".

Now Rosalie is closer to her German home. Originally from Bavaria, Rosalie is twenty minutes from the Austrian border. One advantage is that it meant she could bring more of her things with her when she moved to Siena.

It seems like it was much easier for Rosalie to integrate into Italian society because she didn’t have the initial bewilderment of living away from her home country.

"I think I would have had a completely different experience coming on my Erasmus to Siena had I not already spent two years abroad in Dublin", she says.

What do you love most about Erasmus?

"The people. The city is really small so it’s a really close community of students. The size of the city combined with the people is what I really love about Siena."

Is there any advice you would give to students coming on Erasmus to Siena next year?

"Try and find Italian roommates rather than staying with Erasmus students.