The College View: Bill Clinton warned that Brexit is due to people re-assessing “whether what we have in common is more important than our differences”. Kyle Ewald and Fionnuala Walsh report. 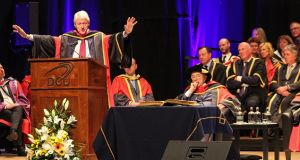 Clinton said “cooperation is better than conflict or isolation in any environment into which you must be in touch with others,” noting that some Brexit voters did not know what they were voting for.

“I’m sorry we can’t stay together, we had a disagreement, oh my god I didn’t know I was going to lose that customs thing with all these economic benefits. Why didn’t anybody tell me that?” said Clinton, pretending to be a British voter.

The former president of the United States was awarded an honorary doctorate today by DCU President Brian MacCraith for his crucial role in the peace process in Northern Ireland.

“It was really quite something, there’s never been any peace agreement exactly like it before,” said Clinton on the Good Friday Agreement. “It broke like a thunder cloud across the world and other people were fighting in other places and they had this talk to say ‘well really do I want to put our children’s generation through this? Or if they can pull this off after all those decades maybe we could too.”

Clinton said universities should be a place for open discussion about if people should live in individual tribes, or as communities with shared values and respect for one another, especially in today’s political climate.

To read the rest of this article please follow this link: thecollegeview.com/2017/10/22/bill-clinton-awarded-dcu-honorary-doctorate/