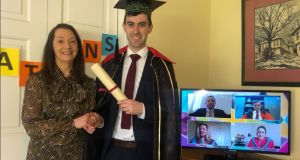 Dr Brian Gordon with his mother Marion Gordon. He dressed in a suit adorned with a Harry Potter cape pulled out of the Halloween dress-up box for his online graduation.

Shortly before 10am on Monday, Brian Gordon gathered with his family in the living room of his home near the town of Longford. Dressed in a suit adorned with a Harry Potter cape pulled out of the Halloween dress-up box and wearing a graduation cap crafted that morning from some old cardboard, the Gordons settled in to watch the first member of their family graduate as a doctor.

Nearly 130km east of the Gordon home, Lorcán Ó Maoileannaigh sat down at the kitchen table with his father and sister in Rathfarnham, Dublin, and tuned into the NUIG online graduation ceremony on his laptop.

In all 190 NUIG medical students graduated early this week after their final exams were brought forward so they could be fast-tracked into the health service during the Covid-19 pandemic. Students were given three days notice that their final medical exams had been pushed forward by around six weeks after coronavirus cases started spreading to Ireland.

Doctors Gordon, Maguire and Ó Maoileannaigh all agree that fast-tracking the exams was the right decision given the ongoing emergency.

“As distressing as it felt the university definitely made the right decision,” says Dr Maguire. “This was beyond anyone’s control, there wasn’t really an alternative other than suspend everything for a year. I have to say I have a lot of respect for the school of medicine; they’ve definitely tried to help us as much as they can.”

“We all appreciated the pandemic was bigger than us and we had the determination to knuckle down and get the job done,” says Dr Gordon. “Now we’re just ready to play our part and serve the country.”

The NUIG graduates will be deployed to hospitals around the country from mid May with induction running until July. Like many health workers, Dr Ó Maoileannaigh admits to feeling nervous and scared about the task ahead. However, he says it’s reassuring knowing he has the “guaranteed support” of his more senior colleagues once he reaches the frontline.

He says the messages of support from NUIG president Professor Ciarán Ó hÓgartaigh during Monday’s online graduation, and the surprise message from the World Health Organisation’s Dr Michael Ryan, helped lift the spirits of graduates who may feel apprehensive about the coming weeks.

“Their message empowered us to go forward and remember we’re playing no small part here. Their words instilled that sense of trust in ourselves and to know to trust our abilities.”

Dr Maguire feels proud to be able to join frontline workers, including her parents and sister who all work in medicine. “There is a feeling of responsibility definitely but also anticipation. I’m nervous but excited too.”

Dr Gordon too felt encouraged by the words of support from Dr Ryan during the online graduation. “I saw the address he gave a couple of weeks ago when he spoke about responding to the emergency and quick thinking on your feet, I was really inspired by that.

“It’s a leap into the unknown, a real baptism of fire,” adds Dr Gordon, who says his parents are a bit nervous about their son working on the frontline but confident in the education and training he’s received.

“It’s been a long road of six years. There’s an element of trepidation there but I am also just determined to get working and play my part, however small that is.”