An anaesthetist and a GP recount their experiences after contracting coronavirus 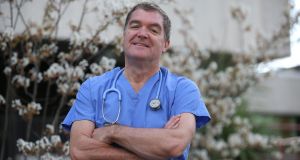 One in four people infected by Covid-19 in Ireland are healthcare workers, figures have shown. A breakdown of this cohort last week showed 25 per cent of these were doctors.

Two such frontline workers who were infected by the novel coronavirus spoke to The Irish Times about their experiences:

“On Friday, March 13th, very ominous, I went into work in the [Royal Victoria] Eye and Ear Hospital and that evening I didn’t feel great. I went home and at about 10.45pm that night, literally in an hour, hour and a half, I deteriorated quite rapidly.

“I got a very bad fever, a lot of sweating. I had a very bad headache. My eyes were very sore and my two eldest boys, one is 21 and the other is 19, they’re both doing medicine in Trinity and the lads were with me at the time and they said: ‘Jesus dad, you’re really unwell,’ which I was.

Dr Kelly, a consultant anaesthetist at St Vincent’s University Hospital as well as at the Royal Victoria Eye and Ear Hospital in Dublin, immediately began a period of self-isolation to help protect others from contracting the coronavirus.

Every hospital patient operated on in theatre requires intubation and ventilation. Implementing this is one of the most risky times for transmission of Covid-19, according to Dr Kelly.

Intubation and ventilation is often undertaken by anaesthetists, placing them at particularly high risk of getting Covid-19.

“I went to bed and had the worst night sweats, I’ve never had anything like it, on the first two nights,” Dr Kelly recalls.

“I had a horrendous 72 hours and then I improved, and improved quite a bit. After about four to five days I felt fine; it was like a bad flu. Then I got shortness of breath; even from mild exertion walking up the stairs I wouldn’t be able to breathe properly. I was quite lethargic and tired and had quite a bit of muscle pain in my chest.”

Dr Kelly got a test on the morning of Sunday, March 15th, at the drive-through facility in St Michael’s in Dún Laoghaire – “so I was in the first 100-150 patients in the country to pick it [the virus] up.

“At that time, because it was so early, whilst everyone was being careful, we didn’t have the same PPE [personal protective equipment] as they do now.

“I had been in London a week earlier, I could have picked it [the virus] up there. But the incubation period would have been a bit long for that; it’s more likely I picked it up here.”

Dr Kelly took paracetamol, plenty of fluids and vitamin C during isolation, but after two weeks was still experiencing symptoms and unable to return to work.

Dr Kelly’s wife and eldest son were subsequently tested for the virus and found positive. “They’ve come through it now,” Dr Kelly says. “We’ve been 2½ weeks cut off from the outside world.”

Dr Kelly must be at least three days symptom-free before he can go back to work. He plans to retest for the virus before he returns.

“The WHO would say that [a retest] is not necessary. But if I was putting you to sleep next week and I was getting over Covid-19 you’d want to make sure I wasn’t giving it to you.”

The average length of stay in an ICU for a patient with Covid-19 is about two weeks, Dr Kelly notes, and unfortunately some of those who are intubated and ventilated there never wake up.

On the day the Leinster rugby team had been due to travel to South Africa last month, Dr Jim McShane, one of the team doctors, was hit by a sudden fever and myalgia.

The symptoms turned out to be the coronavirus.

Luckily, the Dún Laoghaire GP was not getting ready to travel when the symptoms presented, as the team journey had been cancelled a few days earlier amid concerns in relation to the spread of Covid-19.

“They would have wanted to throw me off the plane” had the trip gone ahead, he says.

Dr McShane recalls: “My symptoms were mild, except that it was probably the worst flu I ever had. But I never had the respiratory symptoms. That was the big thing. I was never in fear for myself.

“I laid low for about a week and then on day seven I sprung back to myself and was able to work remotely after that.”

Dr McShane is one of six partners at the Sheehan Medical Practice in Dún Laoghaire, a large group GP practice.

“They were able to cover me without any problem. One of my other partners is now out waiting the result of a test. We’ve had two secretarial staff members who have been out tested and both came back negative and are doing fine.”

He has no idea how he contracted the virus, but assumes it was from a patient.

“We were being pretty careful but we were seeing some children with fever and you would wonder were they carriers. But it’s impossible to say where I got it. I had no contact with anyone known to have had Covid-19.”

When he suspected he could have the virus, Dr McShane rang the HSE helpline. He spent 2½ hours on the phone before his details were logged.

About six hours later, a paramedic telephoned to explain how the testing process would work before arriving to take a swab.

A result was reported within 24 hours. The test was prioritised because Dr McShane is a healthcare worker.

“My dealings with the HSE have been remarkable, way better than I would have ever expected,” says Dr McShane.

Dr McShane is a GP trainer, and programme director of the Trinity College Dublin/HSE GP training scheme. Despite the coronavirus outbreak, GP training is continuing with online sessions, he says.

A lot of change has occurred in general practice, the main alteration being a dramatic reduction in face-to-face consultations, says Dr McShane.

Dr McShane suspects that some of these changes will remain in place when the pandemic subsides. He believes the crisis will ultimately “change the way we practise.

“It has already changed the way we dress . . . It’s definitely going to change general practice, maybe for the better.

“Patients have been remarkably accepting of advice. There is no longer the clamour for antibiotics for viral infections and they are also happy to self-isolate and stay away from us.”