Difficult to gloss over the homelessness problem 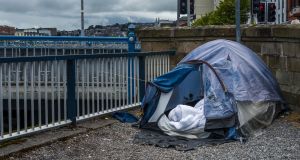 ’There’s the assumption that homelessness automatically coincides with addiction, an inaccurate and ill-informed reality’ Photograph: Getty

As we enter winter and the days get colder, it becomes more difficult to gloss over the ever-growing homelessness problem. When I feel the bitter wind on my cheeks, my hands numb and functionless in the cold, I despair on the Ha’penny Bridge when I see yet another victim of the housing crisis hunched and ignored by the daily thousands passing by.

What adds to this sadness is the emerging fury at the language still being used to describe or discuss people who have not been as lucky as ourselves. Refusing to give change because ‘they’ll just spend it on drugs’, when that change could fall into the bottom of your bag without it impacting you for weeks.

With that, there’s the assumption that homelessness automatically coincides with addiction, an inaccurate and ill-informed reality. Landlords, high cost of living and various other factors outside of substance use can transport families and individuals from security to the streets.

There are many who previously never used drugs, but turned to substances as a means of coping with the tremendous pain and loss society has left them with. Then there are those who were in addiction before becoming homelessness. I have to ask - what is the difference?

I struggle to comprehend the callous notion that such unfortunate circumstances befall the people who deserve them. No person is better than the next and we all deserve basic human rights.

Picture home right now, in all its glory or lack thereof. For the majority of people reading this, it’s safe to assume warmth, shelter, security and a sense of belonging are features within our homes. Not to mention the internet access needed to read this article.

Now imagine all of that is taken away. If it happened due to a fault of your own, you’d want acknowledgement from passers-by, compassion and support. If it happened due to circumstances totally outside your control, you’d want and feel you deserve that even more. Placed on the bottom rung of society’s ladder, left with nothing but your grief and injustice, what options are there?

I read a news post recently about the Peter McVerry Trust opening a homeless hostel on Aungier Street which will house over one-hundred and fifty people as part of the Dublin Region Homeless Executive’s cold weather strategy. Music to my ears. I proceeded to read the Facebook comments underneath the post, and the music turned into the scratchy noise of nails across a chalkboard. Maybe it shouldn’t be surprising, but the lack of empathy, compassion and kindness shocked me.

The argument made by those commenting, as well as an independent councillor cited in the article, was how it will be a ‘disaster’ for the area. Homeless people walking around a street near you, rather than the numerous other streets they are forced to occupy. The response to those celebrating the announcement was you don’t understand what it’s like to have these facilities near you.

Without playing naive, I hear the argument of safety in the area. Many using the hostel will also be using drugs, but that is no ground to deprive them of shelter this winter. A hostel will be devoid of luxury, sometimes a dangerous place for the people in it, yet they will take what they can get. Until the housing crisis ends, and more services created for those in addiction, organisations like McVerrys are doing what they can to help.

I am writing this from the perspective of someone raised in inner-city Dublin, someone who does understand having these facilities near them. Still I can appreciate that I have a roof over my head and a door to lock. Basic human needs need to be met and facilities will be located where they can be (as if property is not already at the forefront of Irish issues). To those thinking only of themselves, enough with the prejudice and entitlement. Society can do better.