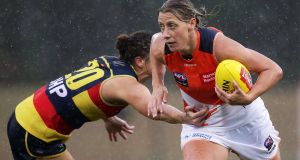 The lure of Australia remains strong despite the global pandemic with 15 Irish women officially locked in on AFLW deals for the 2021 season.

Monday’s deadline for clubs to re-sign players passed with almost all of the Irish players on club lists for 2020 agreeing to return, despite the uncertainty caused by the health emergency.

Former Mayo colleagues Cora Staunton and Sarah Rowe kept their plans a closely guarded secret until the 11th hour, eventually confirming their intentions at the weekend to return to Greater Western Sydney Giants and Collingwood respectively.

Staunton, who will be 39 in 2021, confirmed her news while working as a co-commentator for RTÉ with Marty Morrissey on last Saturday evening’s Dublin SFC games.

As for current Mayo star Rowe, who kicked five goals for Collingwood in her second season Down Under, she acknowledged last week before putting pen to paper that even a contract may not mean anything.

Speaking to the LGFA’s Ladies Football TV, Rowe noted that with Melbourne in Australia currently in lockdown there is little certainty ahead.

Sisters Niamh and Grace Kelly, who also play for Mayo, have agreed to return to the West Coast Eagles while county colleague Aileen Gilroy will play for North Melbourne again.

Mayo manager Peter Leahy stated in May that he won’t accommodate AFLW players and that they’d have to commit fully to the LGFA or the AFL in future.

Rowe has already committed to being available for her club and Mayo this season.

Seoighe and Doonan, who played for North Melbourne and Carlton, have not been retained though there is an extended window until Friday for de-listed players to be picked up by new teams.

Fremantle, the favourites for the AFLW title when the season was abandoned in March, wanted the highly rated Flood to return but she has decided not to for “personal reasons”.

She kicked five goals in total in her debut season and spoke glowingly about the experience in May, describing it as “incredible”.

“The club will work closely with the AFL to investigate what options there may be for Kate to return to the club in the future,” said Fremantle’s Joe Brierty. “We will continue to support Kate and she will stay connected with the club during this time.”

Fermanagh’s Doonan was Carlton’s first ever Irish born AFLW signing when recruited last autumn but was one of four players delisted by the club while the talented Seoighe was also one of four to be de-listed by North Melbourne.