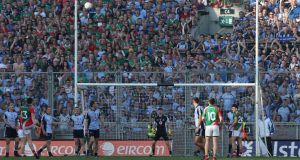 So concludes Cillian O’Connor after his own chilling dissection of the two months since Mayo’s All-Ireland football final defeat to Dublin. And whatever about taking up every waking hour since there is one thing about that defeat which may haunt him for the rest of his life.

“If I could go back now, knowing that the game would be blown from the restart, obviously I would have thrown caution to the wind, and tried to go for the goal,” says O’Connor.

“The way it went, I thought there might be one more passage of play. My understanding was that there would be another little bit of time, and if we had maybe won the kickout, and scored an equaliser . . . I’m just saying it would have looked like a good decision. But if I knew there was as little time as there was I would have gone for the goal.”

For those who may need reminding, this was the moment O’Connor lined up a 21-metre free, deep into injury time, while asking referee Joe McQuillan how much time was left. Mayo trailed Dublin by two points, and clearly under the impression there was still time for more than just the kickout, O’Connor tapped the free over the bar. Then, the final whistle blew as Stephen Cluxton’s kick-out landed.

Referee’s message
So what exactly was the message from McQuillan?

“Well I just said how long was left, and his answer was 30 seconds,” explains O’Connor. “Then Barry [Moran] shouted how long was left and he said 30. And Donal Vaughan came running in and he said 30. So it was obviously rolling all the time, and with people in the way, and me moving and steadying and taking my time, and doing my routine. He was including all of that. I wasn’t.

“The fact that he told Barry and Donal the same thing, I thought it was just 30. But obviously he [McQuillan] didn’t do anything wrong either. At the same time you have to remember that there were 13 or 14 people on the line. The game wasn’t lost in the last passage.”

Indeed it wasn’t, and O’Connor certainly hasn’t gone looking for any further explanation from McQuillan. “No, I wouldn’t dwell on it, and I wouldn’t be pointing the finger at anyone, and wouldn’t be in any way sour or bitter.”

Yet what haunts O’Connor and his team-mates as much as anything is the realisation they didn’t play to their full potential. No county can lose a seventh All-Ireland final and be easily defiant in the face of defeat.

Manager James Horan recently used the brutal analogy of being hit by a bus, and O’Connor, it seems, couldn’t agree more: “That’s one way of describing it. Just blown off your feet, really, with the disappointment. It hits you very hard, eats away at you for a long time. It doesn’t really go away . . . It takes a long time to get over. We’re still dealing with it but we can’t keep looking backwards . . . But we wouldn’t be happy with our level of performance in the final. That’s really where we’d have our bones of contention . . .”

Final fallout
Currently based in Dublin, completing a teaching degree at St Patrick’s College in Drumcondra, O’Connor has been somewhat shielded from the fallout in Mayo, particularly rumours certain players were unhappy with their preparations. Horan has since described that as “rubbish” and O’Connor agrees, and yet the pain of defeat is slow to disappear.

“It’s easier said than done. But you can’t carry baggage beyond Christmas. You really need to zone in on next year. When you break it down, look at the facts, we’ve lost two finals . . . But our age profile is pretty good, our strength and conditioning from the last few years has been good, and from talking to the lads, I know their mental strength is pretty good too. There are probably teams that would like to be in our position. So I’m positive for the year coming.”

In the meantime O’Connor is still nursing the left shoulder injury which very nearly forced him out of the All-Ireland final. He suffered a third dislocation against Tyrone which thus started a four-week race against time. He made it, somehow, with no regrets, but an operation two weeks afterwards means he won’t be back playing for Mayo under next March or April, aiming for two or three league games at best.

“The risk was assessed, and I was cleared to play. I took a small bit of a gamble, but it was looked at by the experts. But the one range of movement that we were trying to avoid was that exact position [in the Tyrone game]. That’s the classic dislocation. Looking back on it I shouldn’t have went for it [that ball] but that’s hindsight again for you. The expert advice was to get the surgery as quick as possible just to allow for the longest possible time to heal. So I’ll be targeting mid-March or April. That’s the rough estimate . . . I’d love to have had four clear weeks before the All-Ireland. But I can’t change that now.”

1 Tour de France: Every yellow jersey winner must feel guilty by some association
2 Kevin Babington: Learning to live again after life changed forever on Long Island
3 Matt Williams: The sky is not falling in on Irish rugby - but Ireland do need a new plan
4 Clifford brothers to the fore as East Kerry retain title
5 Juan Imhoff and Racing 92 leave it late to end Saracens’ reign
Real news has value SUBSCRIBE
Here is your handy guide to sport on television this week