Will NFL return to its more brutal self under Donald Trump? 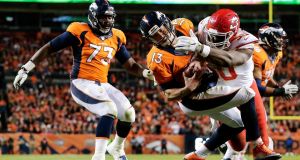 The NFL rules were recently changed in an attempt to combat the number of serious injuries players were sustaining. Photograph: Isaiah J Downing/USA Today Sports

Earlier this November, an NFL executive gave a fascinating, if bewildering, quote to Bleacher Report’s Mike Freeman regarding the future of the United States’ most popular sports league under Donald Trump.

“Under President [Barack] Obama, the country was intellectual and looked at facts. I think that’s why our ratings fell,” said the anonymous executive. “People read a lot about our scandals or CTE [chronic traumatic encephalopathy] and didn’t like what they saw. Under Trump, the country will care less about truth or facts. It’ll be [more raw] and brutal. Football will be more of an outlet. We’ll go back to liking our violent sports.”

On the campaign trail, Trump spoke out about his distaste for the NFL’s recent rule changes, made to prioritise safety and protect players from head injuries. In October, when a woman fainted at one of Trump’s rallies but returned after receiving medical attention, Trump declared, “That woman was out cold and now she’s coming back. See? We don’t go by these new, and very much softer, NFL rules. Concussion. Oh no! Got a little ding on the head. No, no, you can’t play for the rest of the season. Our people are tough.”

It echoed a sentiment from a Trump speech during primary season back in January. “So I’m watching the game yesterday. What used to be considered a great tackle, a violent, head-on, violent. If that was done by Dick Butkus, they’d say he’s the greatest player . . . if that was done by Lawrence Taylor, it WAS done by Lawrence Taylor and Dick Butkus! . . . and Ray Nitschke, right? You used to see these tackles, and it was incredible to watch. Now they [effeminate voice] tackle . . . head on head collision . . . 15-yard penalty. The whole game is all screwed up!”

For Trump, American football served as a perfect example of why America needed to be Made Great Again. As Trump tells it, America is losing the toughness it had in the days of real men like Taylor, who is currently serving probation for pleading guilty to sexual misconduct.

Trump’s promise to restore that kind of toughness to a nation seen as gone soft was a major part of his appeal for many of the white men who supported him and made up by far his largest voting block.

Natalia Petrzela, assistant professor of history at The New School, New York, says this treatment of American football has a grand tradition in America’s political history. “Positioning football as under attack by meddling, effeminate liberals – rules about contact and violence, letting little girls play, insisting on repercussions for players who are violent off the field,” Petrzela wrote via email, “is a vivid way of making a broader point about the unfortunate feminisation of American culture that has been a plank of American conservatism for decades.

“But it’s important to note that this version of masculinity is not all about unrestrained savagery; football is also seen as encouraging hard work, sportsmanship, and discipline, other values seen to be under attack.”

The trick for politicians is to tie all these things together, for which American football is uniquely suited.

Populist presidents in particular have seized on American football as a political tool. Teddy Roosevelt championed the game for its ability to ward off creeping feminisation of America’s youth in what he saw as a sedentary age. “The sports especially dear to a vigorous and manly nation are always those in which there is a certain slight element of risk,” Roosevelt wrote in 1893 for Harper’s Weekly. “It is mere unmanly folly to do away with the sport because the risk exists.”

Ronald Reagan, of course, was known for his performance as Notre Dame American football coach George Gipp in the film Knute Rockne, All American before beginning his political career. He praised American football for its ability to engender “clean hatred,” telling the Washington Post: “It is the last thing left in civilisation where two men can literally fling themselves bodily at each other in combat and not be at war. You hate the colour of his jersey, but there’s a mutual respect that develops while you’re playing on the field.”

But perhaps no politician used American football like Max Rafferty, a populist conservative in 1960s California state politics. Rafferty “passionately celebrated football as one of the few legitimate forms of campus activity that built moral and physical strength,” Petrzela writes, “as opposed to the walkouts and demonstrations he denigrated as representing an opposite sensibility.”

Rafferty was not always a Trump-esque politician. For example, he initially fought for bilingual education in California schools. But in the late 1960s, as the culture wars reached their peaks, Rafferty came down squarely on the side of traditionalism – anti-communist, anti-immigrant, and pro-authority.

He saw patriotism as an “emotional” duty and believed American football and fraternities were the only true and positive forms of campus organisation. And in response to the idea that programmes such as Spanish classes were necessary for the Latino students in California’s public schools, Rafferty took the position that education was there to perpetuate “the cultural heritage of the race”. Or, you might say, Rafferty thought education was there to serve as a cultural wall.

American football was part of that platform for Rafferty, a keystone in his cultural wall. The late 1960s saw American football go through an injury crisis similar to today’s after 36 high school kids died on the playing field in one horrific season in 1968.

Despite those deaths, Rafferty espoused the values of the game in a speech in front of the 1969 California State Conference of Athletic Directors. He warned against the threat posed to American football by leftist agitators. But he added, “I’m not too worried about the outcome. The love of clean, competitive sports is too deeply embedded in the American matrix, too much a part of the warp and woof of our free people, ever to surrender to the burning-eyed, bearded draft-card-burners who hate and envy the athlete because he is something they can never be – a man.”

As Petrzela writes: “It seems that especially in contentious moments, football is prized as a bastion of traditional, masculine, sensibilities that are themselves under threat.”

Whether that threat is real or perceived doesn’t necessarily matter. “In Rafferty’s generation, there was a kind of moral revulsion at what he called ‘The Sick 60s’ – boys wearing long hair, kids protesting the US government and walking out of school, and drug use.

“Today, we see Trump fanning similar disgust about campus politics: young people questioning the gender binary, demands for ‘trigger warnings’ and ‘safe spaces’ and the climate of political correctness that has moved out of educational contexts to the broader culture.”

Will our anonymous NFL executive’s prediction of an American football renaissance in Trump’s America prove true? It’s hard to say. With regards to concussions and CTE, Pandora’s Box has already been opened.

Growing numbers of American parents are saying they would not allow their children to play American football, undoubtedly influenced by the steady stream of reports of CTE findings in deceased American football players – youths and professionals alike.

Trump can’t stop that alone. But will the research into concussions, often funded with federal dollars, continue under his administration? And certainly any movement into ending youth American football in public schools, as two University of Minnesota bioethicists have proposed, would struggle to gain traction in a government helmed by Trump.

“If Trump’s election taught us anything, it’s that predictions about his ability to shape public consciousness are precarious,” Petrzela writes. “I do think that it will be hard for him to push back on the safety regulations for younger players, since the science is persuasive and it is hard to convince parents, no matter their politics, that subjecting to their children to potential brain injury in service of building character is defensible, much less desirable. But in Trump’s America, who knows?”