View from the Couch: Those rowing brothers could have us all hugging yet

O’Donovan brothers are officially cult heroes at this point, thanks largely to RTÉ interview 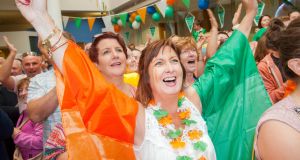 By tea-time you’d nearly have been blasé about the unrelenting good news, Sinead, Claire, Gary, Paul and Steven leaving us hoarse from the Ole-ing. After a week peppered with enough Olympian hiccups to deflate not only ourselves but our Rio 2016 green, white and gold bananas, the happiness reading was off the scale. Funny old Games.

Joanne Cantwell nigh on had to pesuel Neville Maxwell off the Montrose ceiling, so high was he after our rowers enred that the nation will come to a standstill for the doubles sculls finals. And any of you who claim to have forecast that one day the nation would come to a standstill for doubles sculls finals should remove those flaming pants lest your buttocks go up in smoke.

The O’Donovan brothers, of course, are officially cult heroes at this point, thanks largely to their RTÉ interview after their first race when they stood out from the bulk of the crowd, evidently regarding their Olympics as a joy rather than an ordeal. Mind you, it helps when you live up to, or exceed, your own expectations, swimmer Fiona Doyle’s pained chats with RTÉ after her races a grim enough contrast. When few pay a blind bit of notice to your gruelling work over four years, and then cast judgment on your performances in two heats, there can’t be all that much to feel joyous about.

From Raphoe to Rio, Chloe Magee could probably relate to Doyle’s experience, although this being the Donegal badminton player’s third Olympics, she’s been there, done that, etc. A gentle opener to her group campaign would have been nice, but taking 19 points off the second seed and London 2012 silver medallist Wang Yihan of China was decent enough going. More to come.

And RTÉ were probably just relieved to be able to show the contest, worn out as they possibly are explaining why they haven’t had live coverage of most of Annalise Murphy’s sailing ding-dongs, them being at the mercy of the host broadcasters who don’t realise how important Laser Radial is to the people of Ireland at this stage. Its our oxygen, like.

If Annalise wins a medal and we don’t see it live, the host broadcasters should hire extra security.

And should Sinead Lynch and Claire Lambe and Paul and Gary O’Donovan manage a top three finish, there won’t be a cow milked in Letterkenny, Cabra or Skibbereen, the quartet making light of that stormy weather that left them twiddling their thumbs in the Olympic Village for an extra 24 hours.

It’s been a bit stormy of late too for our boxers, but Steven Donnelly just about dispatched a man called Byamba Tuvshinbat, a split decision having him declaring “I’m flying now . . . anything is possible!”

Even a movie. “If he keeps this up, they’re going to make a film about him,” said Michael Carruth.

“We’re still in this!” said Steven, and he could have been speaking for the Irish hockey team after Canada gave them a squeaky-bum time of it in their absolutely-must-win pool game – 3-0 up, then 3-2, ending 4-2. “Please God, we’ll win this easy,” Mark Irwin had said pre-match. God almighty, so much for that.

And then Ireland needed Germany to avoid defeat to Argentina to keep their quarter-final hopes alive, the Germans comfortably doing just that by equalising with . . . eight seconds to go. You’d be stretched.

The golf? Oh yeah, that started too. How excited was Brazil? Well, Sky News’ Paul Kelso shared with us that the host’s Olympic telly broadcaster Globo flicked over to show homeboy Adilson da Silva hit a putt, and then returned to the beach volleyball – “before it reached the cup”.

Forever more, the people of Brazil will wonder if the putt sank. Annalise diehards know the feeling.