Tipping Point: No bone to pick with nondescript England 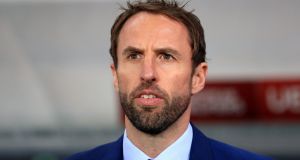 Gareth Southgate: the England manager won’t say a syllable out of place between here and the Tunisia game 12 weeks from now. Photograph: Mike Egerton/PA

Watching the England and Holland teams line up ahead of their friendly the other night, a strange and deeply uncomfortable emotion rose up in this small corner of the terminally bored audience.

All was well initially, as the Dutch anthem struck up and was immediately drowned out by the booing of the troglodyte zombie army that still follows the England team, fighting wars long forgotten and braying of their own tremendous insignificance for all to hear. Gobshites, you thought to yourself, delighted. Hope they get stuffed.

Problem was, when the camera panned down the line of English players singing their own anthem, it was hard not to feel a certain level of humanity towards them. In fact – and this obviously runs contrary to the habit of this and many lifetimes – it was impossible to muster anything approaching the usual ill-will towards them.

You ticked them off one by one – Jordan Pickford, Kieran Trippier, Kyle Walker, John Stones, Joe Gomez, Danny Rose, Alex Oxlade-Chamberlain, Jordan Henderson, Marcus Rashford, Raheem Sterling, Jesse Lingard. Not a single hate figure among them. Not so much as one whiff of controversy off them.

Actually, that’s not quite true.

Pickford, the monster, was the goalkeeper who kicked the ball out that time for a throw-in in the 26th minute so that erstwhile legend John Terry could get his Chelsea send-off. All that hullabaloo could have been avoided if Pickford had decided against being the occasion’s patsy. England’s shame.

At a push. But not really, in all fairness.

What are we to do? In a World Cup year, this is a problem. It’s no big hardship watching a World Cup without Ireland. Much like the weather or the cost of a Dublin coffee, you get used to it across the dreary expanse of a sport-loving life. The last time Ireland were in a World Cup, people were still giving out about prices going up because of the change from punt to euro. There isn’t a schoolkid in the country who remembers what it was like to have a World Cup with Ireland in it. It’s just normality.

But watching a World Cup without a hateable England team? Sure that’s hardly a World Cup at all. You might as well stick on a Bond movie with no Blofeld in it. Or TV talent show with no Simon Cowell. A cricket match with no Aussies.

It’s the question all the great philosophers struggle with – if the England football team goes out of the World Cup and nobody falls off their couch in a fit of laughter, have they really gone out at all?

What are we supposed to do with this bunch? A collection of apparently nice young men, barely so much as a speeding ticket to their name between them. Lingard and Rashford have been engaged in frankly sweet social media war over the past year where one slags the other for wearing the same clothes as him. Seriously, where are we supposed to go with that sort of material? Where, politely, are the arseholes?

England at a World Cup should be a circus. It should be power plays behind the scenes, tactical manoeuvres behind the manager’s back, tabloids going do-lally over the latest ginned-up outrage. It’s supposed to be broken curfews and loose talk of nookie bans, papped pics of the WAGs and sting operations to fit up the boss right and proper.

Most of all, it needs to be fuelled by hubris.

For the World Cup to be any craic at all, we need England going in there full of chat about winning the whole thing. Three lions on a shirt, Jules Rimet still gleaming. Chests puffed out, strut down pat, best league in the world, mate. We need them sitting up in their saddles, handlebars untouched, totally unaware of the pothole about to knock them on their asses.

Instead, what have we got?

A thoroughly pedestrian side with a few handy players, one outstanding but injured striker, no midfield to hang your hat on and no particular firm notion of who is going to be in goal. If Harry Kane makes it, they have a chance of scoring against anyone. But nobody is saying they have it in them to win the thing outright.

Least of all themselves, maddeningly. This is because they’re overseen by a calm, measured, annoyingly reasonable manager in Gareth Southgate who sounded so professional in midst of the Russia madness last week that he probably ought to be put in charge of Brexit before the Tory loonies propose building a wall and getting the EU (or maybe even Mexico) to pay for it.

Southgate is a perfectly intelligent, magnificently boring talker who won’t say a syllable out of place between here and the Tunisia game 12 weeks from today.

This cannot stand. We need a scandal, we need a hero to be a villain. Short of sending Jamie Vardy to an Asian restaurant again, this column is fresh out of ideas. A sting operation on, say, Jordan Henderson, probably wouldn’t get him to admit to anything more serious than a library fine. Raheem Sterling seems like a nice lad who loves his mum and suffers brutally at the hands of the scummier side of the English press. How could you not wish him some way well?

Three months to go and there’s no bone to pick with them.

Where’s the fun in that?