Martin O’Neill, Roy Keane and John Delaney have the interests of Irish football close to their hearts 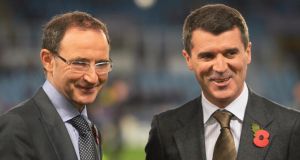 So what do John Delaney, Martin O’Neill and Roy Keane have in common? Besides, of course, that dusty cassette album of the Best of Roxy Music, languishing in the glove compartment of their respective luxury automobiles?

On the face of it, the three most important men in Irish football are very different. But after another trippy week in Irish football, it is hard to avoid the conclusion that all three lads are, in their own way, as tough as nails. And all three are dreamers.

In the heat generated by the most eagerly awaited pairing since Robert De Niro and Al Pacino finally got to share some screen time together, Delaney’s role in facilitating the O’Neill-Keane ticket should not be overlooked. The Waterford man’s ability to “make light” of past tensions with Keane shows he has the ability to do what all true administrators must do: he took one for the company. Not that there was much of a relationship between the men anyway. Keane has, when asked on a few occasions, reserved a few of his most withering one-liners for the FAI chief.

This week, Delaney was cheerfully indifferent about the frosty regard in which Keane has held the FAI while retaining his old treasurer’s exactness in noting that it took the pair of them 37 seconds to resolve their differences. Delaney’s ability to absorb and shrug off personal criticism is his greatest asset as a chief executive.

If you ask any dozen people in the crowd bound for the Aviva next Friday night for their opinion on Delaney, you will find ardent fans and sworn enemies. His salary, his socialising, his tetchy relationship with the press corps and the FAI’s financial obligations to the spanking new stadium at Lansdowne have all come under scrutiny. But Delaney has sailed blithely on.

Delaney’s emergence through the notoriously tricky corridors at Merrion Square was, in a peculiar way, linked to Roy Keane. During the Saipan meltdown, Delaney, then treasurer, emerged as the mellow voice of authority when more senior FAI figures seemed hypnotised by the scale and intensity of the debate.

Slow walk
In the following years, he assumed the position of chief executive and has been there since. Those of us who witnessed his slow walk down the middle of the pitch to the Irish fans on the terrace in Tallinn on the night when Ireland beat Estonia 4-0 to qualify for Europe won’t forget it. Call it chutzpah, call it milking the moment, call it lunacy; it certainly wasn’t dull. This week marked his finest hour, not only because the FAI had the foresight to go with Martin O’Neill but because Delaney’s attitude to Roy Keane has set a bright and optimistic tone.

Judging by the comments that were read on RTÉ radio last weekend, there are still a lot of Irish people who can’t quite forgive Keane for what “he did” in Saipan.

But the most important fact in that entire fiasco is this: he was sent home. He was told to leave the camp. What started as a stormy, internal team meeting quickly escalated into one of the most sensational sporting stories in football history.

The bones of the story were wrongly interpreted as a metaphor for winning at all costs; the embodiment of the new Ireland. Keane was always driven to win, for sure, but the athletic fury with which he played football in an Irish shirt was always fuelled by a romantic and almost innocent belief that the Irish could take on anyone. Keane was always of old Ireland.

Anyone lucky enough to be in Lansdowne Road in 2001 when Ireland played the Netherlands will remember the feeling. It wasn’t just Keane’s ferocious tackle on Marc Overmars and the look on the Dutch man’s face – hauteur giving way to indignation giving way to intimidation. It was the way he made the Dutch sense of entitlement evaporate.

Keane was a complex and thorny figure during his playing days but his frustration in Saipan wasn’t down to the fact that he didn’t care about the Irish football team or his country. It was down to the fact that he cared too much. Ray Houghton spoke on Prime Time during the week about a two-hour discussion he had with Keane in which he was astonished by the depth of the latter’s knowledge of the Irish set-up.

Even when Keane feigned indifference towards the Irish teams – and it should be recalled that he did play again for Brian Kerr’s Ireland – you can bet that he always kept a close interest on what was happening. You can bet that he burned for them to win. Keane is fiercely proud of being Irish and he is obsessed with football: how could he not care?

Strong opinions
Martin O’Neill’s decision to select Keane as his second-in-command is a revelation in its own right. O’Neill clearly has the self-confidence to believe he will be more than able for Keane’s passions, his impatience and his strong opinions.

For O’Neill, the decision made sense: Keane is not just a young ex-manager eager to get back on the sideline, he also ranks as probably the greatest footballer the Republic of Ireland has produced. Alex Ferguson’s recent cold assassination of Keane’s managerial worth was damaging but it was slanted and mean-spirited.

Keane’s three years in management showed flashes of the right stuff– and the stunning early surge with Sunderland has been too quickly overlooked. It probably wasn’t his failure to gain promotion with Ipswich which made prospective employers shy away from Keane so much as his acerbic wit and the general fearlessness of authority.

When O’Neill and Keane appeared together on ITV’s Champions League with Adrian Chiles, there was a sense that they are very comfortable with each other: that O’Neill has come to know the private side of Keane and that Keane trusts O’Neill. Two ex-Nottingham Forest lads from the extreme north and south of Ireland: they can’t have ever have been stuck for chat. And now it has come full circle.

Today is Martin O’Neill’s day. It is a brilliant day for Irish football. The significance of today’s unveiling in Dublin won’t be lost on O’Neill: a 1950s Derry kid taking over one of the most high-profile roles in Irish public life; Northern Ireland’s former captain and now the Republic of Ireland’s man on the sidelines.

O’Neill is such a passionate football man that he was able to fall deeply for the sedate English boroughs of Leicester and Norwich. Can you imagine what his heart will be like on the anthem nights in Dublin when Ireland are playing big games?

The same is true of Keane. And the same, in a different way, is true of Delaney. If they have anything in common, you can be sure they share big, bold dreams for Irish football. Those dreams may prove unreachable but they deserve a chance. Tread softly, now.