’There was stuff I did that was totally wrong. You have to put your hands up and say sorry.’ 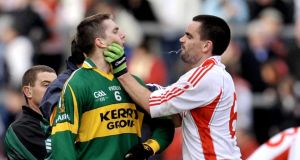 The beard is lighter now, wispy almost. The cheekbones are still narrow though and the hoodie hangs loose over a pinball-machine frame. The ultimate war-time consigliere, Ryan McMenamin has taken to peace-time well. He did his years, got out at 35 so he’d be able to give a few seasons to Dromore and now he doesn’t miss it in the slightest. Won’t even feel a pang tomorrow when Kerry come to Omagh.

“I kind of thought that I would go to the games and feel like I was missing it but I didn’t at all. Once the big games come, I might miss it more. Probably when they play Donegal in Ballybofey I might. But to be honest, I knew I had reached a point where I was happy enough to walk out the door. I was a bit annoyed telling Mickey about it right enough, that was hard to do.

“But I had actually planned to leave when I was 30. I had aimed at 2008 to be the year I would give it up. But we ended up winning the thing then and sure you’re always looking to go back and do the double. I went back for one more and ended up staying another four seasons. I was enjoying it and I was hanging around with good friends through it. But I think you can safely say I’ve adjusted well to life without it.”

Full of mischief
Couldn’t you just see him tomorrow though, full of mischief and bad manners? Jawing away in Kerry ears from first whistle to last, buzzing around them like a wasp at a picnic. McMenamin wasn’t one of Mickey Harte’s originals – he only came into the Tyrone panel at the start of 2003. But every year from then until the end, he and they kept an eye out for where Kerry were and where they were going. He always presumed any route to an All-Ireland would have to take in a green and gold stop. It wasn’t always pleasant but it wasn’t always toxic either.

“I liked playing against Tomás Ó Sé,” he smiles. “He was always a good man to have a laugh with during a game. He’d be laughing at me roaring my head off and we’d be racing up past each other full of chat. Big Darragh was more quiet but you knew there was craic in him. We had our run-ins a few times but I remember talking to him later on and him saying that he always heard me mouthing but he never let on. But every so often, he’d look at me and smile.

“You’d know there was a bit of messing there and you could have a bit of banter. But the thing is, for people looking down from the crowd or even from the journalists’ box up in the stand, all it would have looked like was guys mouthing at each other so people would have thought there was animosity in it. When actually, the truth was we’d be laughing at each other. It would only have been a bit of craic.”

Hmmmm. There’s craic and there’s craic. The enmity between the counties that has bubbled up at club level over the past couple of seasons very obviously took its lead from the occasional intercounty set-to. McMenamin concedes as much but still holds that on a personal level, there was no real rancour involved.


‘Serious respect’
“There was serious respect there,” he says. “When the games were on, we didn’t like them and they didn’t like us. We were in no doubt about the quality of footballers they were but we weren’t going to bow down to them. I think a lot of supporters would have looked at us and thought we absolutely hated them but nothing could be further from the truth. My last game for Tyrone was the qualifier last year and they were nothing but gracious to us after it.

“I think people probably thought there was more to it than there was. It was a rivalry but there was nothing bad about it. They were great, great footballers. If you saw me hitting one of them on the field, all that meant was that I wanted to win. The same if you saw one of them hitting me. It was just footballers trying to win a game. You’d get into the same sort of rows in a club game. Definitely in Tyrone you would anyway!”

For all his niggly tendencies, McMenamin was always a wry enough presence in the Tyrone set-up. Behind the quiet genius of Stephen O’Neill or the jovial mateyness of Seán Cavanagh, McMenamin was the one most likely to crack wise out of the side of his mouth. On the field or off the field didn’t really matter to him. The target made no particular difference either.

“I remember playing Down in 2005 and Maurice Deegan was looking around for Conor Gormley because he wanted to book him. And he was going to me, ‘Where’s number five?’ Conor was standing just to my right but behind Maurice and I was going, ‘Jesus Maurice, he’s away off. Mickey took him off.’ And Maurice was checking through his book going, ‘Is he? I don’t have that here.’ And I went, ‘Aye, he went off after that last score there.’

“Gormley was looking over at me, like ‘What are you at?’ but I ploughed on. I said, ‘What did you want him for anyway?’ And Maurice said he was going to book him. ‘Ach, sure it’s too late now,’ I said. He put the book away and we got on with the game.

“About five minutes later, he saw Gormley running past him with the number five on his back and he shouted over at me, ‘He’s still here!’ Sure I was dying laughing at this point. I said, ‘Jesus Maurice, he must have come back on.’ He knew rightly what I’d done and the next time the play was stopped he caught up with him and booked him. But he had a good laugh with me about it afterwards. I enjoyed stuff like that.”

It wouldn’t be what he’s remembered for though. Not first and foremost anyway. Mention his name outside of Tyrone and it’ll catch in plenty of people’s throat. It wasn’t that McMenamin was a dirty player really, it was more that he was often just unabashedly cynical.

Dropping his knees into John McEntee’s back, reaching out to flick Paul Galvin in the unmentionables, never shutting his yap all through a game – these were the images from his highlights reel that folk cottoned onto. They’re likely part of the reason he ended his career with only one All Star. He knows, he knows. He doesn’t shrink from it now either.

“There was times when I was very sorry for what I did and I apologised. John McEntee and Paul Galvin would have been out of order alright. Those would be times when you’d look back and go, ‘Fuck, why did I do that?’ Stuff like that, you have to put your hands up and say you’re sorry. It would be far worse if you denied they ever happened.”

And if he had his time again? It’s hard to imagine he’d have done much differently. “I always felt I played better when I was playing with a wee bit of an edge. I felt that if the temper was up, I probably played my best football. I tried it other ways at times but it wasn’t the same. I definitely had to be well revved up before I went out.

“The mouthing thing – I was watching Munster play Ulster in the Rabo Direct there one night and the amount of verbals going on was huge. But you never hear a word about it. There was a penalty given at a scrum and the two front rows got up mouthing at each other. And I was there going, ‘That’s basically the same thing that I was doing and not a word about it.’

“We knew that there were players you could get at a wee bit, who wouldn’t like that sort of stuff. You knew there might be some little advantage to be got from going at him. So if a fella missed a free, you wouldn’t be long letting him know about it and then if he missed the next one, maybe it worked. When it comes down to it, whenever you’ve put in that much work, you just do it.”

Still, it’s not his donnybrook anymore and he’s fairly relaxed about it all now. Dromore have been in five of the last six Tyrone county finals – winning three – so he has a few more shies at that coconut to take care of before he calls time.

He’ll head to Healy Park tomorrow and drink it all in. Not itching, not kicking every ball. Just a face in what will doubtless be an animated crowd.

“Tyrone will be looking to relegate them. I don’t think it will be a big thing within the squad but at the same time, if you have the chance to do something like that you kind of have to take it. Mickey will be more concerned with keeping a good run going and keeping the winning mentality going.

“That’s a young Tyrone team and beating a Kerry team that is going all out for the win would do them wonders heading into the summer.

“But if it happens, it will give a lot of Tyrone people a lot of pleasure. It is going to be a heightened atmosphere in Omagh, no doubt about it. And there will be a bit of edge and a bit of niggle. But I think as Dara Ó Cinnéide said there a couple of weeks ago, football wouldn’t be worth going to see if there wasn’t that edge.”

Whatever else, very few sharpened it like he did.