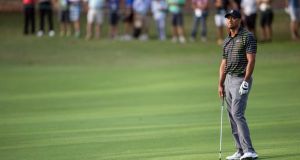 The Rugby World Cup is less than a year away and hopes of an Irish victory are higher than ever. But, if Joe Schmidt’s men fall short in England next year, a plan is in place to ensure that whatever happens, the Webb Ellis Cup will be in Ireland in 2023.

Ireland’s bid to host the 2023 event is set to be officially unveiled today at an event in Armagh. Representatives from the IRFU, the government and the Northern Ireland executive are joining forces to outline their plan to bring rugby’s flagship event to these shores.

Some of the infrastructure needed is already in place, namely in the form of the Aviva Stadium, Ravenshill and Thomond Park, and an Ireland 2023 World Cup would also see a number of Gaelic football venues being utilised, including the famous Croke Park where Ireland played from 2007-2010 during the building of the Aviva.

Next year’s event is staged in England, with some games being played at the Millenium Stadium, and the 2019 competition will be held in Japan.

Ireland has World Cup previous, with the 1991 semi-final defeat to Australia being held at the old Lansdowne, as well as Pool E games and the France versus Argentina quarter final during the 1999 tournament.

If Ireland are going to make history and lift the World Cup next year, it would probably help if everybody would stop getting injured. In fairness, you would have barely noticed Joe Schmidt’s side were missing numerous bodies during the autumn internationals, but still, wouldn’t it be nice if everybody was fit?

There was more injury news yesterday as Leinster coach Matt O’Connor announced Fergus McFadden is out of this weekend’s European Challenge Cup match against Harlequins after undergoing surgery on a thumb injury, ruling him out for 4-6 weeks.

McFadden had only just returned to the fold after recovering from an ankle injury sustained in Leinster’s 23-34 Pro12 defeat to Munster in October, but managed to complete the full 80 during his side’s 18-12 win over the Ospreys last Friday.

Winning is the only philosophy

Coach O’Connor believes the amount of injuries Leinster have suffered, as well as the number of bodies who were recently away on international duty, makes it impossible, and ultimately pointless, to subscribe to a set rugby philosophy - winning ugly beats losing pretty.

He said: “Our philosophy is finding a competitive advantage against the opposition to win the game. That’s our style of rugby.

“The biggest issue here and it’s been well documented, is that you’re changing 10 blokes every week so that competitive advantage changes every week.

“It’s absolutely flawed to have a philosophy of rugby when you have that turnover of bodies.”

Yesterday, John O’Sullivan looked at the key head-to-heads from Munster’s game against Clermont Auvergne, today he looks at the pivotal battles Leinster must win if they want to come away from The Stoop tomorrow with a win.

Tiger Woods made his return to competitive golf in his own tournament, the Hero World Challenge, at Isleworth, and while he came through his round pain-free he emerged languishing at the bottom of the leader board after carding a five-over-par 77.

A nightmare round leaves him 11 shots off the pace set by Jordan Spieth who shot an immaculate 66, while Graeme McDowell shot a 68, giving him a share of sixth place with Hideyaki Matsuyama and Jimmy Walker.

Perhaps unsurprisingly after a four month absence a leaner looking Woods struggled to control the ball, and his short game was particularly poor, with a number of duffed chips even I would have blushed at.

Lowry off the pace

In Sun City Shane Lowry is six off the lead of Ross Fisher going into the second round of the Nedbank challenge after steadying the ship on the back nine following a wobbly start to card a level par 72.

Meadow on course for Tour card

Stephanie Meadow’s bid to secure a 2015 LPGA Tour card is gathering momentum. She shot a 66 on day two of the final qualifying school at Daytona Beach leaving her in seventh place, two off the lead. Antrim’s Meadows is now targeting a place in the top 70 by Friday, after which the field will battle it out on Sunday for the 20 full-Tour cards on offer.

M50 stadium a long way off

The Director General of the GAA, Paraic Duffy, has dampened hopes of the association building a new stadium on the outskirts of Dublin.

Hopes of a new Leinster ground to be built on Dublin’s M50 ring-road increased after association president Liam O’Neill voiced his support for the idea earlier this week, however Duffy feels there are more pressing matters at hand.

He said: “That is an idea we would have but it’s not short-term. We simply wouldn’t have the resources to do it. It’s not going to happen in the next three years, let’s say.

It has also been announced that streaming service GAAGO is set to be expanded for 2015, and would include The Sunday Game for the first time. According to Muirne Lafan, managing director of RTE Digital, the GAAGO service had been subscribed to in 157 countries by the end of this year’s championship.

Dublin hurler Ryan O’Dwyer has paid tribute to former captain Stephen Hiney after he became the latest-high profile retirement from the inter-county game.

Athletics is currently in the headlines for all the wrong reasons, after a German television documentary accused Russia of implementing a doping scheme which included 99% of its athletes, leading to WADA announcing it will begin a full investigation into the matter.

However, it’s not all doom and gloom for the sport, with the International Olympic Council soon to look at 40 recommendations which will better serve the IOC after the 2020 Tokyo games.

Ian O’Riordan spoke to Pat Hickey, president of the Olympic Council of Ireland and one of 15 members on the IOC executive board.

David Morris’s UK Championship dream has come to an end after he lost 6-3 to Stephen Maguire in the fourth round last night. Maguire took an early lead, but, with Ken Doherty observing from the BBC commentary box, Kilkenny man Morris fought back to make it level at 3-3. However, On-Fire Maguire took the next three frames, ending Irish hopes for the tournament.

Elsewhere Ronnie O’Sullivan, who’s been limping around on a broken foot all week, made a 147 as he demolished Matthew Selt 6-0.

Liverpool have announced they are to start building work on a new main stand at Anfield, with building work expected to be completed by summer 2016. The expansion will take the grounds capacity up at 54,000 and will generate an extra €25m per season.