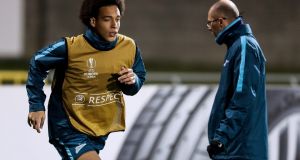 Say what you want about the source of the money that has fuelled their impressive recent successes but Zenit St Petersburg have quite a history and, in famed composer Dmitri Shostakovich, a better class of celebrity fan.

In his day, Shostakovich, a qualified referee, was a bit of a regular at the club’s games. He once described football as “the ballet of the masses,” and in what was possibly a related move wrote a three act ballet, The Golden Age, in his youth about a Soviet team travelling west for a game only to end up in jail as they encounter match fixers and assorted other bad guys.

It has a happy ending with the team freed by local workers who overthrow their capitalist oppressors and dance a dance of solidarity with the foreign footballers.

Inevitablly, this being Shostakovich, it was banned for a bit.

A wartime Soviet cup aside, the composer never got to see the club win anything of note but in the years shortly after his death they finally began to make a bit more of an impact and a league title was finally delivered in 1984.

It is in the last 10 years, though, with the backing of the multi-billion dollar business Gazprom that the club has really become a force. The company spent a reported $100 million or so on players when it took over and the return on the investment has included four Russian titles and Uefa Cup.

The current squad is packed with internationals and while the same might be said of Dundalk’s other group rivals, Maccabi and AZ, we are talking a slightly different level here with Zenit happy to reject a bid of more than €20 million from Juventus for Belgian international Axel Witsel because they were not entirely confident they could adequately replace him - the club, as it happens accepted a bid from Everton that was, at the time, worth almost €10 million more but the player then declined to go to Merseyside.

The 27 year-old is certainly remains a key figure in a side that had, in recent years relied on the goals of Brazil’s Hulk and, before that, Aleksandr Kerzhakov. The Russian is back at the club after a brief spell in Switzerland but the attacking threat is routinely posed by others these days like his international team mate Artyom Dzzyuba while another Brazilian international, Giuliano, has made a flying start since arriving - six goals in eight games - and Robert Mak, whose recent goals for Slovakia against Scotland, have contributed greatly to Gordon Strachan’s currently high levels of discomfort.

In all, Mak and co. have scored 29 in their last eight games, nine in their two previous group games and four of those in the crazy closing stages of the away game in Tel Aviv. The club’s Romanian coach, Mira Lucescu, a former Dinamo Bucharest star who has 12 league titles in three different countries to his name as a manager, must have been relieved to get away with a win there but expectations here will surely be higher again despite the home side’s surprisingly strong start to their own European campaign.

Lucescu, a man who speaks six languages and has a reputation for encouraging his players to read a bit, admitted at his press conference that he had not heard of Dundalk before being drawn against them. His take on them now got lost a little in translation but, beside him, Dzyuba appeared to have settled for the standard issue “British style and like long passes,” assessment.

If Zenit get to play their own game tonight, Dundalk might not be able to avoid living down to the description but Stephen Kenny, like Lusescu, will be happy to let his players do the talking.

1 Serpentine stays on from the front to steal Epsom Derby for Aidan O’Brien
2 Monica Seles: The warrior queen who could have been the best ever
3 World Athletics freezes out Russian athletes after $5m fine goes unpaid
4 Eamon O’Shea: We spent quite a bit of time talking about older people rather than to them
5 Séamus Power huffs and puffs as Wolff blows the door down in Detroit
Real news has value SUBSCRIBE
Crossword Get access to over 6,000 interactive crosswords