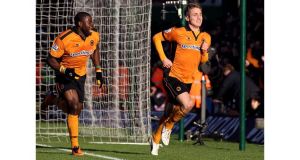 Wolves 3 Tottenham 3:Steven Fletcher rescued a deserved point for Wolves with a late equaliser in a pulsating Barclays Premier League clash with Tottenham at Molineux.

Kevin Doyle and Jermain Defoe shared four first half goals before Roman Pavlyuchenko looked to have wrapped up victory for Spurs. But substitute Fletcher headed home the leveller in the 87th minute to earn his side a vital point in the battle for survival.

It also prevented Spurs from climbing above Chelsea into the fourth Champions League spot.

Defoe had the satisfaction of scoring his first Premier League goals of the campaign in his 14th appearance and he now has 99 in total. But Wolves produced some of their best football of the season.

Nenad Milijas was a constant threat playing behind Doyle while Matt Jarvis delivered a series of menacing crosses.

Before kick-off there was a minute’s applause from supporters in honour of former Wolves and Tottenham defender Dean Richards who died last week aged 36.

Spurs made a bright start and were the first to threaten on a bobbly pitch. Luka Modric teed up Pavlyuchenko 20 yards out but he opted to place his shot and did not seriously test Wayne Hennessey.

Hennessey needed to react quickly in racing out of his area to hack the ball clear from Defoe after he chased down a long clearance from Benoit Assou-Ekotto.

But Wolves enjoyed a sustained spell of possession and Adam Hammill then picked out the run of Milijas into the Spurs box but he could not keep his header down.

Jarvis had a first time shot deflected by William Gallas into the side netting but it came as no surprise when Doyle put them ahead.

Milijas delivered another quality cross and Doyle got in front of Gomes and flicked his header into the net.

Spurs responded and after 30 minutes a superb strike from Defoe brought Spurs back on level terms. He had time to line up a shot 25 yards out but he caught hold of it perfectly as it flew past the drive of Hennessey.

Five minutes later another brilliant effort by Defoe put Spurs in front. Modric’s pass, cut out by Ward, rebounded fortuitously to Defoe and from the left of the area he curled a shot past Hennessey inside the far post.

Wolves hit back and after 39 minutes Doyle made it 2-2 from the penalty spot.

Milijas had his shirt tugged by Hutton who appeared to be the last defender as he chased down a deflected shot by Doyle. But referee Mark Halsey opted to yellow card Hutton before Doyle sent Gomes the wrong way from the sot.

Spurs needed only two minutes of the second half to regain the lead through Pavlyuchenko. Jenas was allowed to run unchallenged to the edge of the Wolves box before slipping the ball to Pavlyuchenko. He turned inside before drilling a 15 yard shot past Hennessey. It was his 11th goal of the campaign.

Michael Dawson was yellow-carded for upending Hammill in full flight.

McCarthy made his first change after 58 minutes with Sylvan Ebanks-Blake, who netted twice last week against Blackpool, replacing Ward.

Wolves started to build some momentum and Gomes made a fine save to turn Milijas’ low drive onto a post.

Hennessey had to be alert in saving at the feet of Defoe who raced onto Modric’s ball over the top, before Gareth Bale made his return after a back injury in place of Pienaar.

The Welshman could have wrapped the points up but shot wide from close range and then Stearman had the ball in the net from a Milijas cross, but Halsey adjudged Gomes had been fouled.

Defoe came close to completing his hat-trick when his shot hit the post shortly before letcher levelled with a header from Jarvis’s cross in the 87th minute.