Who can Dundalk face in Champions League playoff? 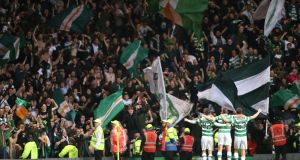 There is a one in five chance that Dundalk fans could be making the trip to Celtic Park. Photograph: Russell Cheyne/Reuters

The draw for the Champions League’s final qualifying round takes place in Monaco on Friday. There are five teams Dundalk can come up against. As an unseeded team, and league champions they can only face other league champions and seeded sides. Therefore they avoid the likes of Manchester City, Porto, Villarreal and Roma for a place in the group stages...

Brendan Rodgers’ tenure began with one of the club’s worst ever defeats as they were beaten by Gibraltar’s Lincoln Red Imps. Rangers’ return to the top flight adds domestic spice in Scotland this year but Rodgers’ first season in charge will ultimately be judged on how far his side progress in Europe.

European Cup semi-finalists in 1970, where they were beaten by eventual winners Feyenoord, Legia have not reached the group stages since the 1995/96 season. The Polish champions held on at home against Slovakia’s AS Trencin to put themselves one game away from the main competition.

The Cypriot champions reached the play-off round in dramatic fashion, scoring three injury-time goals to dump out Norway’s Rosenborg 4-2 on aggregate. Last reached the Champions League group stages in 2014/15, and reached the quarter-finals in 2011/12 after stunning Lyon in the last-16.

It took Viktoria Plzen until 2011 to win their first Czech title. They appeared in the Champions League the season after, drawing with AC Milan and beating BATE Borisov to third place in a group also containing Barcelona. Qualified thanks to away goals after a 1-1 draw with Azerbaijan’s Qarabag.

One of the sides in the widely loathed Red Bull stable, the Austrian champions are forced to drop their sponsor from their name in European competition. Giovanni Trapattoni managed the club between 2006 and 2008. Reached the play-offs after edging past Albanian minnows Partizani Tirana.