The Norwich man could be key for this team, if given a chance by the manager 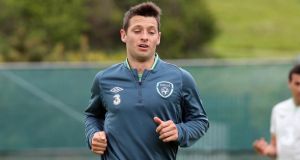 Wes Hoolahan: could be the ideal link man in the modern number 10 role, between the midfield four and lone striker, for the really competitive internationals. Photograph: Donall Farmer/Inpho

Tomorrow’s friendly with Georgia brings to mind my first competitive game as senior manager, against the same opposition in Tblisi 10 years ago. The atmosphere was, to say the least, hostile. Many of our players were hit by flying missiles, including a knife thrown at Kevin Kilbane and a bottle that just missed Gary Doherty’s head after his late winner. Earlier, Damien Duff’s opener had inspired an almost riotous reaction.

It was, then, a nervous night for all of us, but particularly the small, brave band of Irish supporters who travelled. We were relieved to get out with the points – and our safety.

The contrast with tomorrow’s game could hardly be greater, but I have to wonder why the FAI is taking on a team with a world ranking of 96, without a player in the squad familiar to most – unlike the team of that era which had players of the quality of Georgi Kinkladze, Kakha Kaladze and Shota Arveladze, all technically brilliant, if a little suspect mentally.

It’s certainly not the most attractive of fixtures after the relative excitement of the England game.

What that game confirmed for the manager was that David Forde, Séamus Coleman, James McCarthy and Shane Long are well suited at this level and deserve to be in the starting 11 for all competitive games from now on.

The emergence of Ciaran Clarke, James McClean, Jeff Kendrick and Robbie Brady, too, means that the coach, in the aftermath of the Euro 2012 debacle, now has a more talented, youthful and vibrant group of players to select from for the crucial Autumn fixtures that will decide the team’s fate – and probably his.

In many ways, the player I was most pleased for on Wednesday was Stephen Kelly who appeared to be another on the list for discarding after the untrue allegations made against him following the Faroes game. At least that matter was sorted, his good name restored. His commitment to the cause has never been in doubt.

With McCarthy and Long suspended for Friday next, there’s a chance tomorrow for Wes Hoolahan, in particular, to stake a claim for a start against the Faroes. But he needs to get on the pitch first, and there’s no guarantee of that.

After one minute against Colombia at Fulham in 2008 he was left ashore for four years until the Greek friendly last November and has only been used as a substitute since. But his ability is obvious, just as it was in the Dublin Schoolboys League with Belvedere. A long time ago.

Creative player
Wes could be the ideal link man in the modern number 10 role, between the midfield four and lone striker, for the really competitive internationals. That’s the role he plays at Norwich where he drops in to defend in midfield when required, or marks the opposition’s deep-lying midfielder to prevent moves starting constructively. Equally important, he can be the creative player making chances for others, or finishing himself – as he did against Poland with a deadly strike from the promising Kendrick’s lobbed pass.

Crucially, also, his intelligent movement and passing would allow us retain possession for longer periods, and bring our new progressive full backs, Coleman and Marc Wilson, into the play further forward.

In too many games, our team has spent too much time chasing after lost possession. Yes, defensive tightness is paramount, but periods of sustained possession are equally so, giving defenders a break from the pressure, the constructive passing moves instilling confidence in the team. There were short spells like that against Sweden away, but rarely so in the Austria game at home. Maybe tomorrow we will see more.

Discussion of Wesley also brings to mind the focus on a number of former League of Ireland players making a big impression in the squad. For those of us who have been steeped in the league all our lives it’s very satisfying to see Forde, Coleman, Long, McClean, Keith Fahey, Kevin Doyle and, more recently, Conor Sammon all fighting their way in to the squad.

Their moves to Britain and establishing themselves at first-team level have been crucial, of course, but some of the credit for their development lies with underage managers here and the professionalism and improved coaching methods at our clubs over the last 15 years.

Better prepared
The obligatory qualification for our league coaches has meant players in the League of Ireland have been better prepared tactically, technically, physically and mentally for the challenge of going abroad. And the fact that these players are generally moving in their early 20s now means they are more mature and better equipped than lads going at 16.

Also, the fact that clubs actually pay transfer fees for them, no matter how small, gives the player a higher status than those who come through their club academies. That’s just the nature of it.

Sadly, the economic downturn means less full-time training at our league clubs now, but the knowledge and commitment of our coaches remains, which should ensure the pipeline continues to flow, even if a little slower.

As for tomorrow’s game, I don’t see it having any impact on the meeting with the Faroes. It’s likely that Trapattoni has his starting 11 for that game set in his head already. But it is still an opportunity for some of the newer squad players to force themselves up the pecking order and for the manager to be even more surprised by some of the talent available to him, now that he is actually seeing it for himself.