Vindication for McGeady as crucial points are rescued 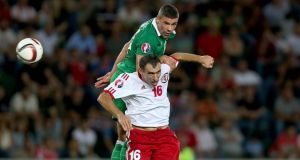 One of the reasons Giovanni Trapattoni used to give for picking Robbie Keane in every game, regardless of the fluctuations of his form, was that he could not rely on anyone else in the team to score.

The “swingers”, as Trap called them, were particularly guilty in this respect. He used to ask, with withering irony: if I don’t have Keane, who will give me the goals? Duff? Hunt? McGeady?

McGeady’s shyness in front of goal was always particularly mystifying. Before last night, the Everton player had averaged a goal every 23 matches for Ireland and his only goal of any real consequence came more than three years ago in a Euro 2012 qualifier against Macedonia. Even then it was a slightly scuffed effort that owed a lot to goalkeeper error.

On countless occasions he would work his way into good shooting positions only to shoot wide of the near post.

To win a Euro qualifier for Ireland in Tbilisi with two brilliant goals was therefore a sweet moment of vindication for a man who has amassed more caps than players like Roy Keane, John Aldridge or Kevin Sheedy without being taken to the hearts of supporters in quite the same way.

Afterwards, the manager praised the winning goal as “a stroke of genius”. McGeady certainly never heard that from Trapattoni. He has started the season strongly at Everton, where he has been used more often in central positions, and it will be interesting to see if O’Neill in time deploys him there for Ireland.

The circumstances of the winner must have come as a massive relief to O’Neill, who had seen his team give a ponderous performance reminiscent of the late Trapattoni period.

The team selection had contained a few surprises. The selection of David Forde ahead of Shay Given was not one of them, since the manager had said Given “had a bit of work to do” and admitted that players “definitely lose a little bit” when they’re not playing regular football. It was difficult to imagine him saying these things about a player he intended to pick.

The absence of Wes Hoolahan was a surprise, however, since Hoolahan had played in all eight of O’Neill’s matches so far, starting six of them, and usually looked like Ireland’s liveliest and most perceptive attacking player. O’Neill instead chose to use James McCarthy and Stephen Quinn in midfield ahead of Glenn Whelan.

McCarthy has been playing the deeper role at the base of midfield for the last five years under Roberto Martinez at Wigan and Everton, and he didn’t always look as though he knew how to influence the game from the more advanced position. He did, at least, set up McGeady’s first goal with a casually elegant move and pass, but neither he nor Quinn were able to enliven the team with the sort of intelligent prompting of which Hoolahan remains our best exponent.

Robbie Keane was also involved in that move and it was one of the only significant moments of involvement he had in the match. Midway through the second half, Ireland’s captain missed the chance to score the goal that would have justified his selection ahead of Shane Long.

Overall, it was not the sort of performance that filled you with great confidence about Ireland’s chances, especially not when you contrasted it with Scotland’s efforts against Germany in Dortmund, but at least they had avoided starting the campaign with a slow puncture. In the circumstances you might have thought O’Neill would be happy but, at the risk of irritating the Irish manager even further, he again made a somewhat cranky impression in his post-match interview.

Earlier in the week, Roy Keane had complained about the media’s negativity about the team’s chances, and last night O’Neill similarly accused RTÉ’s Tony O’Donoghue of focusing on the negative. Presumably this is all part of some crude circle-the-wagons motivational strategy, because the fact is that there is currently scarcely any negativity in the coverage of the team.

There have been times when the atmosphere has been really bad – post-Saipan, the last year under Trap, most of Steve Staunton’s time in charge. The current situation is not remotely comparable to any of those times. If this is how O’Neill and Keane react in peacetime you wonder what will happen if things ever do turn nasty.