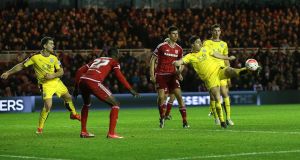 Burnley will be hoping for big things in Monday’s draw for the fourth round of the FA Cup after Stephen Ward’s first club goal in just over two years earned his side victory over the weekend at Middlesbrough.

“I don’t get many so it was nice to score and we’ll see what the draw brings in the next round,” said the Dubliner after the game. “My job [at corners] is to screen the goalie and the ball just fell to me so I stepped off him, swivelled and hit it.

“It’s nice to be in the hat and we’ve not beaten sides in the top four or five in our league yet so it’s a good marker. We’re happy to win and go through to the next round. To come from a goal behind is pleasing as well. The gaffer said soak in the feeling of beating a team like this because there are plenty more battles to come against quality sides.”

Jon Walters also got the winner for Stoke as they beat Doncaster Rovers 2-1. Marc Wilson played all 90 minutes of the game as did Darron Gibson for Everton who beat Dagenham and Redbridge 2-0.

There was no cup joy for Stephen Dawson or Paddy Madden, both of whom started for Scunthorpe at Stamford Bridge where Chelsea won 2-0 but Callum O’Dowda and Patrick Hoban who made late appearances from the bench for Oxford United as the League Two outfit dumped Swansea out of the competition.

In Scotland, Inverness manager John Hughes said he is the man to revive Anthony Stokes’ flagging career, with the 51-year-old suggesting he would give the Irish striker a “kick up the arse”.

“We have made contact with Celtic and I think ourselves and Celtic believe it’s the best thing for him to work with me again,” said the manager who previously had Stokes at Falkirk and Hibernian with the player doing well on each occasion. “I will keep my eye on him in Inverness and I can get him going again.”

Stokes was not involved in Celtic’s 3-0 defeat of Stranraer on Sunday.