Ibrahimovic hints he will stay at United beyond summer

‘I go in, I go for the kill and I go out . . . I never leave a job unfinished,’ says Swedish striker 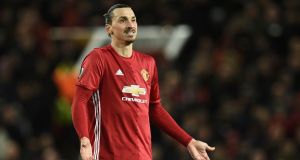 Zlatan Ibrahimovic has confirmed he is in talks over extending his Manchester United contract beyond this summer and has hinted he will sign a new deal by claiming he will “never leave a job unfinished”.

The 35-year-old striker has the option of another year on his contract and the United manager, Jose Mourinho, has already said he wants the Swede to stay. Ibrahimovic has also been linked with a move to Major League Soccer.

“I’m a person when I go into something I put my head 200 per cent and I do what I’m good at,” said Ibrahimovic, who has scored 26 goals in all competitions this season, in comments reported by the Manchester Evening News.

“I go in, I go for the kill and I go out. And when I go out, there is no complaints, that’s what I do. I never leave a job unfinished.

“Let’s see what happens, we are talking. I have an option for another year, I want to do great as long as I’m here, so let us see, there is a lot of time.”

Ibrahimovic has surpassed expectations in his debut season in the Premier League after joining on a free transfer from Paris Saint-Germain last year.

He has scored 15 goals in the top flight this term and believes Mourinho is the “perfect coach” for his talents.

“I’m enjoying being at a fantastic club, without doubts, one of the biggest clubs in the world with a great coach,” he said. “I know him before, he’s a winner, he’s the perfect coach for this club.

“Being a Manchester United player, I don’t know how many people have that possibility but I am a Man United player, people wanted me here. I chose the best English club.”

Meanwhile, Erik Lamela will play no further part for Tottenham Hotspur this season after the club announced that he will have surgery to fix a long-standing hip problem on Saturday. The Argentina international has not played since the League Cup defeat at Liverpool on October 25th.

Lamela, who joined Tottenham from AS Roma for £25.8 million (€29.7 million) in August 2013, has made just 14 appearances this season. In total he has played 119 games for Tottenham, scoring 19 goals. He missed the second half of his first season at White Hart Lane with a back problem.