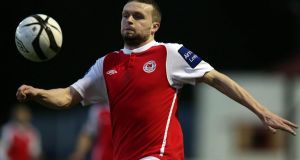 They don’t generally score as many goals as their opponents, and their lead at the top of the local league table is modest by comparison, but crucially St Patrick’s Athletic have the upperhand as they head into tonight’s second leg of their Europa League qualifying tie with Zalgiris of Lithuania.

The task then, is not to blow what is a winning position after last week’s great draw.

The Dubliners have done that three times this season, twice against Dundalk, but they head into this game in confident mood after three clean sheets in the league and a draw last week in Vilnius, where goals by Conan Byrne and Ger O’Brien twice pulled them back level.

Both managers have full squads to choose from and neither side is likely to be much changed from the first game although recently arrived midfielder Elvinas Zagurskas is eligible to feature this evening.

Having come on for his debut in Sunday’s 4-2 league win at Siauliai, the 23-year-old is expected to start in Richmond Park.

‘Similar situation’
“I think we still have a similar situation (to before the first leg),” said Zalgiris’ Polish coach Marek Zub not long after touching down in Dublin yesterday.

“Of course you (St Patrick’s) are playing at home but if the team wants to move to the next round I think it’s absolutely necessary to win this game.

“I don’t expect that your team will try to obtain the draw in this game. It will be a fight for the win.”

Those used to watching Liam Buckley’s side will most likely agree with the team, despite the generally tight defending of late, set up to win games rather than avoid defeat and there may well yet be a few more goals before it becomes clear who gets to take on either Teteks (Macedonia) or Pyunik (Armenia) in the next round.

The earlier start in Yerevan means the identity of the opposition will be known before kick-off in Inchicore.

Will look to
Zub will look to the likes of Russian midfielder Pavel Komolov, Polish striker Kamil Bilinski and Lithuanian international Mantas Kuklys to get the goal, which is the very least his side requires to stay in the competition.

However, the manager accepts that it will be tough to progress now against a side that impressed him in the away leg and is unbeaten in 11 European games at Richmond Park.

“We wanted to pressure them from the last minute because we felt it was necessary to score the first goal and we sacrificed too much energy I think so that in the last few minutes of the game we were not fresh or focused enough because we were too tired,” he said.

“So tomorrow will be interesting because they are a quality team; full of experienced players with good habits.

“There were no positional weaknesses; it is a well organised team with players who carry out their responsibilities well.”