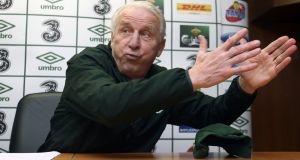 As the Republic of Ireland ’s preparations ahead of the first of two critically important World Cup qualifiers continued to take shape in Malahide yesterday, Giovanni Trapattoni said he is already clear about the team he wants to play in Stockholm on Friday.

“It’s just better that it’s not in the newspapers for another few days,” he joked after training, “as that would be bad for morale.”

On the face of it the main question seems to be who will partner John O’Shea in central defence and to judge by the regularity with which the manager cites last month’s Poland game as firm evidence of some remarkable Irish revival, the answer would appear to be Ciarán Clark.

Darren O’Dea, and particularly Seán St Ledger remain in contention, however, with Trapattoni appearing to see the latter as having some potential to counter the pace possessed by a Swedish attack, whose star turn is, of course, Zlatan Ibrahimovic.

St Ledger’s fitness certainly doesn’t seem to be a significant issue for the Italian, with Trapattoni enthusing about the Leicester City defender’s return after such a long lay-off.

Over the course of yesterday morning’s training session, indeed, it was David Forde, Jonathan Walters and Glenn Whelan who looked to be the source of slight concern with the three sitting out some or all of the workout and game.

Afterwards, though, Trapattoni insisted that all would be fine and will, most likely, take some part this morning when Robbie Keane is also expected to make his first appearance of the week after the long journey home.

Just a precaution
“No, they (Forde and Walters) are okay, it was just a precaution,” said the manager. “They are not in great pain. It was only for rest. I’m sure that tomorrow they can take part.

“Also Glenn (who has a slight knee problem), he’s not swollen; that’s important. It’s just a knock and tomorrow he will be with us for sure.”

Keane may find the change in weather a little harder to come to terms with over the next few days than the shift in time zones.

As it has been more than once in the recent years for the Irish, the climate in which Friday’s game is played will be a significant factor although this time it will be far colder than the players are used to and in this instance there is the added complication of a looming disagreement between the two camps over whether the temperature should be controlled or not.

The forecast for Stockholm suggests that it will be minus 10 degrees at the midway point in the match whereas, with the roof closed on the recently-built Friends Arena, it would be closer to plus 15.

Swedish coach Erik Hamren said yesterday that his preference is for the latter with the 55-year-old observing, without appearing to attach any great importance to the matter that: “It would be better for the supporters and also for me as I would have to wear one layer less but I don’t think it would make any great difference to he players.”

Trapattoni is agreed with his opposite number on that much but privately the Swedes acknowledge that an enclosed space would make for a better atmosphere, something the Italian, understandably enough, is not necessarily so keen on.

“With the roof closed the echo from the stands is very loud,” he said in Malahide. “I have experienced this in Germany and it is not so good (for the visiting team) so I prefer the roof to stay open.”

Holding a veto
The Swedes actually sought an indication of his preference last week and with the Italian effectively holding a veto on the matter unless Fifa decide he is being unreasonable, they are hoping he comes around but Trapattoni seemed clear yesterday that unless external conditions are so poor as to adversely affect the game while in progress – and that seems unlikely as heavy snow is not currently forecast – then he’s prepared to wrap up that little bit warmer.

The former Juventus boss believes that the playing surface will not be affected either way although the situation is complicated by the fact that a major Bandy match (a sort of ice hockey played on a soccer-sized pitch) was staged at the stadium at the weekend and the ice is now being melted so that a new pitch can be laid ahead of the football.

In the meantime, the Swedes are having to train outside in temperatures of minus five degrees, something that the federation and their manager acknowledge is less than ideal.

There were no such problems for either of Sweden ’s games so far at the venue (friendless against England and Argentina ) both of which, as it happens, took place under a roof but Hamren insists that his players have considerably more to worry about this time than the weather.

“This will be totally different, not be the same sort of open and friendly game,” he said. “The Irish are really good at set-pieces and counter-attacks. I think they will play with a deep defence and hope to counter attack against us.

“The others came for a party whereas the Irish will come to spoil one.”