Republic of Ireland’s World Cup qualifier against Wales is in the Aviva, March 24th 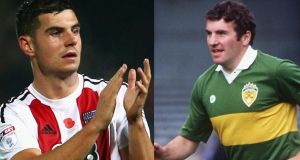 Brentford’s John Egan and Reading’s Liam Kelly have both been included in Martin O’Neill’s extended 39-man Republic of Ireland squad for the upcoming World Cup qualifiers against Wales and Iceland.

Cork native Egan is the son of the late, great Kerry footballer John Egan. A five-time All Star with the Kingdom. The 24-year-old is in his first season with Brentford after spells with Sunderland and Gillingham.

Newcastle goalkeeper Rob Elliot returns to the squad for the first time in a year since being injured against Slovakia. Sunderland’s Darron Gibson has also been recalled after gaining some regular playing time at the Stadium of Light.

Brighton & Hove Albion defender Shane Duffy and Reading midfielder Stephen Quinn miss out due to injury, while Burnley midfielder Robbie Brady will be suspended for the Wales game after collecting his second yellow card of the qualifying campaign last November.

The squad will report into camp on Sunday 19th March, the following day the squad will train at the FAI National Training Centre in preparation for the two games.

The visit of Wales will be Ireland’s fifth qualifying game following victories over Georgia, Moldova and Austria, as well as a draw away to Serbia.

Currently top of Group D, Ireland have six qualifying games remaining - four of which are at home - as well as upcoming friendly games against Iceland, Mexico and Uruguay.

Tickets for the Wales game are sold out, but there are still some on sale for the Iceland game.