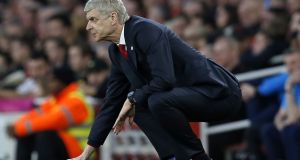 One of the many criticisms routinely directed at Arsene Wenger concerns his tactical conservatism and it is fair to say that he has seldom deviated from his preferred and predictable 4-2-3-1 in recent years.

But on the back of a crucial drop in form Wenger has actually started the last two games with a new plan, playing 4-3-3 against Bayern Munich and Lincoln to address the malfunctioning midfield by adding an extra man. He thinks some of his midfielders, namely Aaron Ramsey and Alex Oxlade-Chamberlain, benefit from being in a three and perhaps it is also designed to relieve some pressure on the struggling Granit Xhaka. Although he has had to change things around in both games (after Laurent Koscielny’s red card against Bayern and Oxlade-Chamberlain’s hamstring strain against Lincoln) it is revealing that Wenger is trying something tactically new in a bid to save Arsenal’s season.

It is, of course, a credit to Lincoln that he would play his strongest team, in its potentially most solid guise, against the non-league flagbearers.

2) Karanka wants fighters in absence of Downing and Bamford

Aitor Aitor Karanka left Stewart Downing and Patrick Bamford out of his match squad and it is doubtful the pair will feature again this season. While Downing has reportedly had a training-ground disagreement with his under pressure manager Bamford has failed to make the desired impact following his January move from Chelsea.

Asked about the duo’s absence Karanka replied, tellingly: “In the difficult moments I need fighters in my team who are going to fight for this club.” Such loyalists include Adam Clayton, who can expect to start in midfield when goal-shy Boro’s relegation fight resumes with Manchester United’s visit on Sunday.

“We know we have a top manager in charge and we’re right behind Aitor,” said Clayton. “He puts everything - everything - into the job. There are no chinks between Aitor and the team - we just need a win to turn everything that’s negative into positives.”

Club and country have been left sweating over Harry Kane after the Tottenham forward departed White Hart Lane on crutches and wearing a protective boot on his right foot. Mauricio Pochettino fears an absence similar to that endured in the autumn “of seven weeks” could lie ahead.

Spurs laboured through that period after Kane injured the same joint in mid-September, initially hoodwinked into thinking they could get by after a 5-0 thumping of Gillingham in the League Cup and a fine win over Manchester City.

Their subsequent six-game winless run proved more realistic, and the onus will now be on Son Heung-min and Vincent Janssen to ensure the loss is not felt quite so keenly. Gareth Southgate, too, must find a solution for England’s games against Germany and Lithuania, the latter a World Cup qualifier, later this month. He will announce his squad on Thursday and one wonders whether Andy Carroll, only recently recovered from groin trouble, could be an option.

4) Revenge would be pleasing for Mourinho but not essential

And how will Manchester United cope without Zlatan Ibrahimovic? The 35-year-old could have been the perfect answer to Chelsea’s unbeatable aura at present but he will have to watch from the stands while United try to take another step towards retaining the FA Cup.

Jose Mourinho has said he will not be using the under-23s against Chelsea but may be forced into a rethink now Marcus Rashford, Wayne Rooney and Anthony Martial have been ruled out.

Antonio Conte has a fully fit squad and with the Double a possibility the Italian is unlikely to make as many changes as in previous rounds of the Cup. Conte masterminded a 4-0 league win over United in October. While Mourinho may not be fixated on revenge because of his side’s push for a top-four league finish and focus on the Europa League, the Portuguese would definitely enjoy a spot of payback against his old club.

5) Antonio for England Bilic can’t see why not

If one West Ham player did not deserve to be a loser on Saturday then it was Michail Antonio. After serving a one-match ban he returned invigorated and full of invention. When shoehorned into pockets of space he has the ability to wriggle free and find a solution, as he did to score his ninth goal of the season.

Gareth Southgate will name his England squad on Thursday and while Slaven Bilic has previously argued a case for the inclusion of Mark Noble and Andy Carroll, Antonio is surely the most deserving this time around. He was named in Sam Allardyce’s maiden squad in August but was not included in Southgate’s group for his four games so far.

“He has got the legs, the determination, he has got the timing, he has got physical strength,” Bilic said. “He has got the ability. He is doing that week in, week out. He is a player that is very important for us but I don’t know about the England squad - you will have to ask Gareth.”

6) Age shall weary them but Jagielka and McAuley keep going

The Premier League has seemed guilty of ageism at times this season but not on Saturday. The division’s oldest outfield player, 37-year-old Gareth McAuley, retained his record of playing every minute for West Bromwich Albion. The 36-year-old Gareth Barry had the most touches of any player, 99, after being preferred to Everton’s putative player of the year, Idrissa Gueye.

And the 34 year old Phil Jagielka returned to the side after being granted only one minute of first-team action in 2017.

Ramiro Funes Mori, who can be erratic, had one of his poorer days at Tottenham last week. The recalled Jagielka added solidity against set-piece specialists. “It was a good game for Jags in the way West Brom play,” said Ronald Koeman. “The team was defensively strong.” This suggested it is premature to pension another veteran off. Jagielka may be slowing but certain games still suit him.

7) Should a Premier League pitch also be a rugby field?

It’s not an ideal situation when you have a game the night before, any game - never mind rugby league.

Hull City boosted their survival hopes with a 2-1 victory and while Oumar Niasse was the focal point for praise after his two goals, both managers were scathing about the state of the KCom Stadium pitch.

Hull FC had played a Super League fixture the night before and it was cut up significantly. The surface was certainly not conducive to a free-flowing, passing game and Marco Silva was clearly unhappy, saying: “It’s impossible at this level. There was a heavy game here yesterday. There are so many things the club needs to improve.”

Paul Clement, whose Swansea team share the Liberty Stadium with the Ospreys rugby union region, added: “It’s not an ideal situation when you have a game the night before, any game - never mind rugby league. In my opinion that’s not right.” Hull won this game but does this arrangement hurt them in the long term if they are going to persevere with a more expansive approach under Silva.

8) Can hits them alright but does he have what it takes in midfield?

Emre Can continues to stall on signing a new deal at Liverpool and despite his winner against Burnley the jury is out on how big a loss his departure would be. If a 25-yard zinger can be a fluke this is what the German’s strike seemed like. As a midfielder his meat and drink is getting hold of the ball and spraying it around to control the contest; this he failed miserably to do against Burnley.

After the victory Jurgen Klopp was asked about the 23-year-old: “Emre has an outstanding attitude, he always wants [THE BALL]. I like to speak positively about a player. The second half Emre was very good but first half it was a challenge he should have had before [BURNLEY’S]goal. But things like that happen in football, it does not make you a bad person.”

No, but it can make a player a liability. If Liverpool are serious about re-establishing themselves as a force they cannot afford any of those.