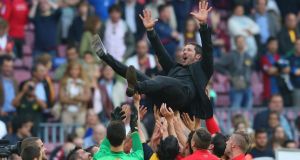 Diego Simeone is thrown in the air by his Atletico Madrid players after winning the La Liga on Saturday. Photograph: Alex Livesey/Getty Images

The fighting spirit Atletico Madrid have shown all season meant coach Diego Simeone never doubted they would come from behind to draw 1-1 against Barcelona and claim a first La Liga title for 18 years.

Barca needed to beat Atletico in the final-day showdown to snatch the title away and Alexis Sanchez gave the hosts hope when he rifled home from an acute angle after 33 minutes at a packed Nou Camp.

But four minutes after the break Diego Godin powered in a header from a corner and Atletico defended robustly to earn the draw they needed and claim their first championship since 1996.

“I never thought for a moment that the team would not be able to do it. They always have a response, the bigger the challenge is, the more determined they are to achieve it. From the first moment I walked into the dressing room here I noticed that,” Simeone said afterwards.

Simeone was an Atletico player when they last won the championship and he has passed on his determination to the team as a coach.

“The work and effort of this team is the key and nobody makes any compromises. The team understands this,” he said. “Today will be one of the most important days in the history of the club. To become champions against Barcelona is a great feeling.”

Atletico lost Diego Costa and Arda Turan to injury in the first half, but battled hard to grab the point they needed.

“We were calm at half-time as the team had started well although the injuries to Diego and Arda were a problem,” said Simeone. “From there though we continued to be competitive and fight for each ball which is what I asked for. We looked comfortable.”

Simeone gave a special mention to former Spain coach Luis Aragones, who was a major figure at Atletico and died in February this year. Aragones spent most of his playing career at the Calderon and then coached the club on several occasions.

“It is a strange feeling, I feel very emotional,” said Simeone. “I have been thinking of Luis and (former Atletico president Jesus) Gil. I am sure that Luis was out there helping us defend in the area in the second half.”

Atletico have little time to celebrate as they face Real Madrid in the Champions League final next Saturday.

“Today we have been able to make history, but now we have to play Saturday and we have to prepare for that game,” Simeone added.

1 Born to ride, born to win: Sam Bennett, the making of a green machine
2 Wolves to sign Nélson Semedo to replace Matt Doherty
3 Next stop the Champs-Elysées in green for Sam Bennett
4 Ulster’s European dream clinically crushed by Toulouse
5 Lance Armstrong’s latest move serving him well on many fronts
Real news has value SUBSCRIBE
Crossword Get access to over 6,000 interactive crosswords