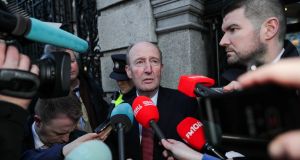 Minister for Transport, Tourism and Sport Shane Ross addresses the media after a meeting with Uefa officials in Dublin. Photograph: ©INPHO/Morgan Treacy

A delegation led by Minister for Sport Shane Ross will meet with senior Bank of Ireland officials on Wednesday as part of an effort co-ordinated with Uefa to provide the assurances the financial institution requires to support the FAI’s survival plan, after a key meeting in Dublin was described by all sides as “productive”.

After having been engaged in what seemed for a while a little like a game of pass the poison parcel, Ross suggested after the meeting on Tuesday between Government and Uefa officials that both sides had moved closer to the sort of understanding required to get the association’s bankers to release the required funds, a figure put at €18 million at the start of last month.

Ross was adamant after the meeting that the Government would still not be guaranteeing that money or providing the troubled association with “a bailout”. However, Uefa went straight from Government Buildings to meet the bank in order to set out the sort of future income that it will provide and Ross, along with Minister of State Brendan Griffin, will follow up on Wednesday morning by restating, it seems, the Government’s determination that the organisation will not slip into either examinership or liquidation.

“You’re not going to guarantee absolutely anything at this stage but I’m determined that that shouldn’t happen and I’m fairly confident the goodwill is there to ensure it doesn’t.

Uefa’s determination to avoid either scenario unfolding was partly evidenced by the seniority of the delegation it had sent to Dublin, with general secretary Theodore Theodoridis leading a team that also included director of national associations Zoran Lakovic and financial controller Josef Koller.

It might well be asked just how engaged the organisation was with regard to the reality of how the FAI was being run when it was being asked for millions in advance funding during the John Delaney era, but it can be in no doubt now about either the seriousness of the situation or how embarrassing it would be for Uefa if, for the first time ever, one of its member associations was allowed to go under.

Theodoridis said little but made positive noises as he and his colleagues left Kildare Street and headed off to meet the bankers.

FAI chairman Roy Barrett, the association’s lone representative at the table on Tuesday after executive lead Paul Cooke had been asked by the Government side not to attend, said that more meetings would be required before what might be described as a fix might be agreed, but Ross suggested that he feels that a great deal of progress can be made this week.

He will hope to be able to provide reassurances to representatives of FAI staff and other stakeholders when he meets them on Wednesday at 3pm. Griffin said that he was at least confident that the wages would be paid out in Abbotstown this month, although he admitted that that would not provide too much comfort to those caught, through no fault of their own, in the middle of this sorry saga.

“The FAI is going to come forward with a programme for us, a plan for us,” said Ross, when asked about the ongoing threat to jobs, “[but] we’re determined that the interest of the staff should be protected.”

Members of the association’s council are very much in Ross’s sights, it seems, however, with the Minister doubling down on his assertion that the composition of the body which sits before the association’s board “needs to be looked at”.

With the entirety of the soccer family now anxious for the Minister to provide very substantial support to the association, related concerns seem to have been put to one side, with Ross insisting that there had been “absolutely no dissent whatsoever” to his assertion that “more democracy [is required] in the election of the council”.

Barrett said that everyone wants “more reform” and “more improvement”, but with an election now due far sooner than any FAI meeting capable of making further changes to its constitution, the feeling is likely to have been that it was best to humour the Minister, then see how the voters and the post-election mathematics impact on the situation.