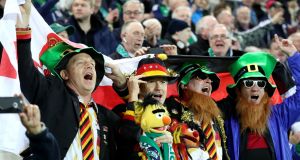 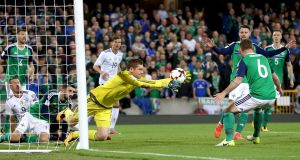 World champions Germany may have won 3-1 at Windsor Park on Thursday night but Northern Ireland are still parading, if not yet to Russia, then almost certainly to the play-offs.

A degree of camaraderie has opened up between the Northern Irish and German fans, particularly since the two teams competed in the Euros in France last June. On that memorable day thousands upon thousands of German and Northern Irish fans marched cheerfully together all the way from the great landmark of the Eiffel Tower to the Parc des Princes stadium for the game. Germany also won that day, but by only a single goal, thanks to the acrobatic heroics of goalkeeper Michael McGovern.

There was a reciprocal plan last night for another parade of happily mingling fans from that other great landmark, the King’s Hall in south Belfast, all the way along Lisburn Road boulevard and down one of the side streets to Windsor Park. But then the peace process got in the way. Somebody remembered that such walks need the permission of the Parades Commission, and that applications must be lodged way in advance – so that idea was scrapped.

The mood was still good en route to the stadium. Northern Ireland had a few players from English Premier League clubs, but they were also relying on colleagues from Heart of Midlothian, Charlton Athletic and Millwall, all up against the millionaires of Barcelona, Real Madrid, Bayern Munich, Manchester United, Liverpool and Paris St Germain. But hope springs eternal, and Northern Irish fans were speculating on the possibility of a big scalp buoyed by manager Michael O’Neill warning that his charges would “make life difficult” for the Germans.

Some Germans arrived without tickets but they were quickly made to feel at home. They were catered for by the Oktoberfest beer extravaganza running in the King’s Hall, where again both sets of fans could mingle and watch the match on a giant screen.

That was where the goodwill ended, however. Within less than two minutes of the kick-off the visitors were a goal up, thanks to a sweet strike from Sebastian Rudy. But Northern Ireland fans are nothing if not loyal. They roared for the Green and White Army and lustily sang “We’re not Brazil, We’re Northern Ireland”. They cheered long balls, blocks, and frees and throw-ins won by Northern Ireland, and also the few times when the home team strung a few silky passes together.

That was an attempt to intimidate the Germans that didn’t work. On 21 minutes Sandro Wagner fired a left-footer into the top corner. There was little chance of a comeback after that, notwithstanding QPR’s Conor Washington striking the bar in the second period. And so it proved, with Joshua Kimmich scoring a third with minutes to go in the second half.

But still the fans sang and chanted and were rewarded by a consolation goal by Josh Magennis in the dying moments, putting some respectability on the result. But there is real hope. Northern Ireland are unassailably second in their group, and barring an unlikely series of final results in other groups they seem certain to make the play-offs. So there is still a chance that, just like in Euro 2016, Northern Ireland and the Republic will make it to the World Cup in Russia.