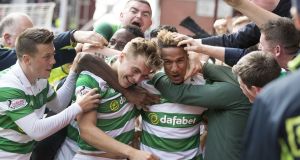 Scott Sinclair (right) celebrates his winning goal for Celtic in the the Scottish Premiership match against Hearts at Tynecastle. Photograph: Steve Welsh/Getty Images

Scott Sinclair kicked off his Celtic career in style by coming off the bench to score the late winner in a 2-1 Scottish Premiership victory over Hearts.

The 27-year-old’s four-year deal following a transfer from Aston Villa was only announced in the morning and he watched from the dugout at Tynecastle as James Forrest drove the visitors into the lead in the eighth minute of a typically feisty encounter between these two teams.

Hearts midfielder Jamie Walker won and converted a penalty in the 36th minute and the second half continued to ebb and flow before Sinclair replaced Stuart Armstrong just after the hour mark.

In the 81st minute he showed why Brendan Rodgers had brought him to Glasgow when he tucked away a Leigh Griffiths cross for a dream debut.

With Rangers drawing 1-1 with Hamilton at Ibrox on Saturday and Aberdeen playing out a goalless draw with St Johnstone earlier on Sunday the champions took the chance to put immediate pressure on their realistic title challengers, thanks to their newest recruit.

It was a confident start by the Jambos but they fell behind following a swift Celtic break where Callum McGregor was challenged inside the box by defender Igor Rossi.

The ball fell invitingly to Forrest, who smartly sent his shot past the hands of goalkeeper Jack Hamilton. However, Armstrong appeared to be offside and in his line of vision.

Hearts worked themselves back into the match and should have levelled in the 23rd minute when Callum Paterson delivered a fine cross from the right to evade Celtic goalkeeper Craig Gordon and find former Hoops striker Tony Watt.

But from only a couple of yards the debutant – on loan from Charlton – somehow missed the target with his header.

Back came Celtic and Griffiths was wayward with a chip before Hamilton made a decent save from Forrest’s deflected drive.

However, Hearts drew level in controversial circumstances when referee John Beaton adjudged Parkhead left back Kieran Tierney to have fouled Walker in the box and after Gordon was booked for delaying the spot-kick, the midfielder sent him the wrong way with his shot.

Celtic responded and after striker Moussa Dembele had an effort blocked, Griffiths’s follow-up shot was headed off the line by Rossi before Hamilton gathered.

There was no let-up in tempo although the wind continued to play havoc.

Hearts finished the half stronger, drawing two saves from Gordon, the second one especially impressive from a powerful drive.

Paterson became the sixth Jambo into the book, joining Rossi, Walker, Arnaud Djoum, Conor Sammon and Watt, when he tripped Dembele 20 yards from goal. Griffiths’s free-kick struck the wall for a fruitless corner.

In the 68th minute, after Forrest sprung Celtic on a swift counter-attack, Hearts defender John Souttar threw himself to block a Dembele shot.

There was a Hearts penalty claim when substitute Robbie Muirhead, on for Watt, was challenged by Kolo Toure but this time it was ignored by Beaton.

However, moments later there was even more drama as Griffiths raced down the left before sending in a cross which Sinclair flicked past Hamilton to the glee of both the former England Under-21 player and the Hoops fans behind the goal.