Sammon gets nod ahead of Doyle for double-header 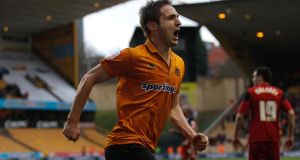 Republic of Ireland manager Giovanni Trapattoni has left Wolves striker Kevin Doyle out of his 23-man squad for the upcoming World Cup qualifiers against Sweden and Austria, although he is named as one seven standby players for the double-header.

Doyle scored his first goal for the club since the start of December in Wolves’ 2-1 victory over Bristol City at Molineux, but it was only eighth goal of the season.

Trapattoni has kept faith with Derby County frontman Connor Sammon after playing him in the friendly international against Poland.

Aiden McGeady and Paul McShane were both ruled out due to knee and ankle injuries respectively, but Shane Long has been named amongst the forward options despite his ongoing problems with an ankle injury.

Sammon’s Derby County team-mare Jeff Hendrick also remains in the squad after making his debut against Poland, while Marc Wilson returns to the squad having recovered from a broken leg.

Reflecting on the set-up of the squad, Trapattoni said: “As a manager, I am sometimes faced with some very tough decisions, but I feel that the squad I have chosen will get us the results we need from these two qualifiers.

“I have not made these choices lightly, and will continue to monitor each player’s progress ahead of our next challenges in May and June.”

Ireland play Sweden at the Friends Arena in Stockholm next Friday before hosting Austria at the Aviva Stadium on Tuesday March 26th. The squad will assemble for training in Malahide tomorrow.