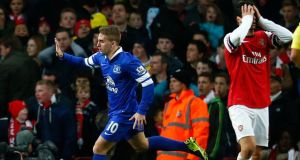 Everton’s Gerard Deulofeu celebrates after scoring the equaliser against Arsenal at the Emirates. Photograph: Andrew Winning/Reuters.

England manager Roy Hodgson in his team’s 1-1 draw at Arsenal.

Arsene Wenger showed his frustration yesterday at an opportunity missed to extend his club’s lead at the top of the table to seven points – the advantage still stands at five. The Arsenal manager complained about what he felt were tactical fouls from Everton that went unpunished and he said that substitute Gerard Deulofeu’s late equaliser for the visitors ought to have been disallowed for a high boot from Romelu Lukaku in the build-up.

Wenger gave a rueful smile at the news that his club have been drawn at home to Tottenham Hotspur in the FA Cup third round. “We don’t have enough tough games,” he said. “They gave us another one.”

But Barkley’s game was what quickened the pulses and Martinez, the Everton manager, was generous in his praise. Barkley turned 20 last Thursday and has three England caps. With more performances like this there will be calls for Hodgson to consider him for the World Cup finals.

“When I see Barkley, I see bits of [Michael] Ballack and bits of Gazza, [although] I can guarantee you that he is quite unique,” said Martinez.

Gifted player
“He has incredible balance with both feet, he is really strong and really powerful. He is developing an incredible awareness. He is someone that you can compare to any other nation . . . I mean the young Brazilians, Dutch and Spanish players. He has a gift and that talent.

“Ross is an incredible person, so mature and he has a real love for the game. I’ve never seen an English player with that sort of mentality and I have had the privilege to work with many youngsters who have been successful.

“We needed to find a role for him, specifically off the ball and then he needs to be able to express himself. We need to give him time. We have to recognise a real English diamond. He isn’t ready yet but he has everything to mark a real era in our football.”

Martinez did, however, caution against expecting too much too soon from Barkley. “The England manager has to decide what role, if any, he wants for Ross [at the World Cup],” he said.

“What we need to do is make sure we give Ross another 50 starts to see his evolution. Any player needs to develop an understanding. In this country, we need to be more protective over our youngsters because, in Ross, we have someone who, if we look after him properly, can give us something unique.”

Arsenal dropped points at home in the league for the first time since the opening day defeat to Aston Villa and Wenger struggled to conceal his frustration.

Wenger’s frustration
“I think Lukaku was offside [in the buildup to the equaliser] and he made a foul,” said Wenger

. “The referee didn’t give it and it doesn’t mean that we have to concede afterwards. [Laurent] Koscielny can head the ball but he cannot do it because of Lukaku’s attempted overhead kick.

“I just feel that when we got out of Everton’s pressure on the ball and into our passing, they stopped us every time with a foul. The disadvantage of putting the pressure so high is that if you are not winning the ball back, you can be outnumbered . . . so to just make a foul without being punished by the referee is a huge advantage because after that, you can play 10 against 10 in one half again.”

Wenger did attempt to take the positive from the point and look at the broader picture. “We have shown consistency until now and an absolutely fantastic attitude. That’s why we are different to last season,” he said.

“We are, as well, a better team. We are more stable defensively and dangerous offensively.”
Guardian Service