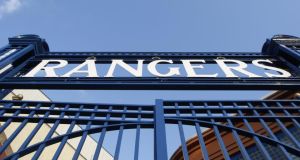 Phoenix Suns owner Robert Sarver has made a revised €25.5 million bid to buy a majority shareholding in Rangers, the club have announced to the Stock Exchange. (Photograph: Danny Lawson/PA Wire)

Robert Sarver has upped his Rangers takeover bid to €25.5 million and offered the crisis-hit club a €8 million emergency loan to help keep it afloat in the meantime.

The US financier had an €23 million offer rejected on Tuesday despite the Ibrox board announcing it was dangerously short on cash.

Now the owner of NBA side the Phoenix Suns says he is willing to provide cash to pay off loans already taken out in recent weeks if the club accepts his new revised offer.

He also hinted he would be willing to continue working with former oldco director Dave King and the Three Bears — wealthy fans Douglas Park, George Letham and George Taylor — who have both bought significant stakes in the past week.

In a statement given to the Stock Exchange, the 53-year-old Sarver said: “This revised proposal hopefully helps the board deal with its short-term cashflow crunch and also addresses my desire to see the club on a solid long-term financial footing.

“It would also enable Rangers to repay the loans from Mike Ashley and Sandy Easdale, and free it of debt.

“I know, of course, that there are various groups of prominent fans who have been working hard for a long time to bring change to the club and they can rest assured that, if my proposal is accepted, I am committed to building a strong partnership with fans and key stakeholders to do what is best for the club.

“I look forward to receiving the response of the Rangers board.”

Sarver wants to buy a majority shareholding in the club, who require €10.5 million by April 1 to stay in business, by way of new shares and will then make a bid to buy out the remaining shareholders at 25c a share.

The CEO of the USD 10 billion Western Alliance Bancorporation has already provided proof of funds to the club, although their stock exchange statement notes that “there can be no certainty that any offer will be made”.

However, it still remains unlikely that he will be able to get the support needed to have his bid accepted.

The Rangers board voted down its own resolution nine at the last month’s AGM, which would have allowed it to issue fresh shares to new investors without first offering them to existing stakeholders.

Any move to issue fresh equity, therefore, requires 75 per cent shareholder approval, but, with King and the Bears now in control of around 34 per cent and determined to protect the club for the fans, that may prove too great a hurdle.

1 Seán O’Brien: Anger over my parents’ break-up never left me
2 Robbie Henshaw likely to be the only Irish change for France finale
3 Bartomeu resigns and drops bombshell of Barcelona joining European Super League
4 Gerry Thornley: Antoine Dupont and France look perfectly primed for Ireland visit
5 Drogheda United finally on the up and up after dramatic night
Real news has value SUBSCRIBE
Crossword Get access to over 6,000 interactive crosswords