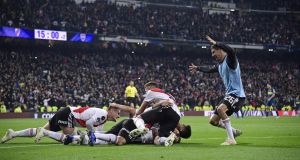 It may forever be marked with an asterisk and there will be more chapters to come in this most extraordinary of stories, soaked in symbolism, sport and society, but it is River Plate whose name is on the list of Copa Libertadores winners again. The game that would never end, reached the very, very end. With 120 minutes on the clock and River Plate 2-1 up, Boca Juniors hit the post, the tension clawing at nerves like never, ever before. That left them with one last chance, a corner that the referee seemed determined to delay, and their goalkeeper Esteban Andrada in attack, where he had been for seven or eight minutes already. It also left them exposed.

As Boca desperately sought salvation, some miracle in the dying seconds, suddenly River were racing away. Gonzalo Martínez raced up the pitch, no one between him and an empty goal. So sure were River of the goal that as he ran one way, his team-mates ran every which way, celebrating already. Boca’s players, meanwhile, crumpled on to the turf, even before the ball was run into the net. By then, there were only nine of them out there, one man sent off, another walking injured, the rest exhausted physically and emotionally.

A wonderful goal from Juan Quintero, the game’s outstanding player, had put Boca on the edge of the abyss; now they tumbled into it. From 1-0 up, they had finally been beaten 3-1. This extraordinary occasion had an astonishing finish – except, that it might not yet be finished yet. River are champions of South America, for now, at least: engraving this huge trophy might prove unwise just yet. There will probably be a legal challenge from Boca, who argued that this game should never have been played. They had felt forced to play a match that, until Ignacio Fernández kicked off, might never have happened.

But it did, and it was won by River, 5-3 on aggregate. The never-ending match finally ended, two weeks late, 6,248 miles away, and in the last second of extra time at the fifth attempt. It had taken a month, amidst biblical storms, violence and arguments. The first game had finished 2-2; before the second leg, Boca’s bus had been attacked, windows smashed with bricks, tear-gas getting in. Players vomited, were taken to hospital, captain Pablo Pérez appearing with a patch over his eye. It was put back an hour, then another, then another, to a backdrop of conflict, police charged and violence. Eventually, Conmebol announced that it would be held the next day.

It wasn’t. The clubs’ presidents reached a “gentleman’s agreement” not to play, but there was little else agreed. A postponement became something a little more permanent; although it was played, the idea that the trophy should be left without a winner dismissed. Pressure applied and politics appearing, it was decided that it would not be played at River’s Monumental stadium. Ultimately, it would not be played in Buenos Aires or even in South America. Madrid emerged as a “solution” of sorts. The trophy, named after South America’s liberators, was handed over in Madrid, capital of the old empire.

In crossing the Atlantic it was inevitable that it would change, becoming an event attended by Leo Messi and Cristiano Ronaldo, players from Barcelona, Bayern, Juventus and Madrid, over 72,000 here, but too few of those who were supposed to have attended it. There were, though, fans from both teams – unusually – and plenty of noise, a repertoire of songs, if little of the paraphernalia: no ticker-tape or fireworks, less of that wildness that helps make this game attractive – that untamed quality.

There was something of that in the way the game played out, mind you. Every inch was fought for, a referee so permissive as to be almost comic at times. Once or twice, it made you wince. No quarter would be given. There was little flow and chances were few; they were also mostly Boca’s. Pérez, the captain with the eye patch a fortnight ago, had the best of them. Turning goalwards from close range 10 minutes in he was denied by Franco Armani and nine minutes after that his deflected shot squirmed just wide.

There was a vulnerability about River that offered opportunities. Armani was swift to prevent Sebastian Villa’s cross reaching Dario Benedetto but he could do nothing, though, when Benedetto came running towards him just before half-time to open the scoring superbly.

From Boca’s bench, they ran to join him in the corner, the noise shaking the stadium, thousands bouncing in blue and yellow before them. It was his fifth goal in the competition – all of them from the semi-final onwards. River needed a response and they got it, particularly after the introduction of Quintero. They felt they should have had a penalty 10 minutes into the second half when Andrada clattered into Lucas Pratto; they were denied then but the momentum was building and Pratto provided the finish to a wonderful move involving Nacho Fernández and Exequiel Palacios to equalise.

And so it went on, even longer. Extra time came. All that nd it came down to this. The final, final 30 minutes began with Boca reduced to 10 men, Wilmar Barrios sent off for his second yellow card and River turned the screw, 18-year-old Julián Álvarez, flashing the best of three shots over the bar before Quintero smashed in off the bar.

Boca chased, and chased until the last, fighting until they could do no more, something almost primitive in the effort, the drama the emotion, and the final run of an extraordinary month, Martínez all alone in Madrid before the eyes of the world. – Guardian service

1 Gordon D’Arcy: If Farrell can tap into our self-worth, we’re all on a winner
2 Winds of change as Ireland name a refreshed team, picked on form
3 Who is Caelan Doris? Meet Ireland’s newest rugby star
4 Clongowes calmly restore order after Terenure’s terrific start
5 Ireland v Scotland: Murray keeps Cooney at bay in starting lineup
Real news has value SUBSCRIBE
Crossword Get access to over 6,000 interactive crosswords