Real Madrid at the Bernabéu: How to get there, how to get tickets and more 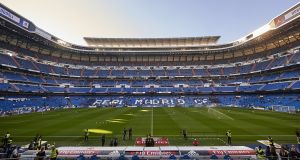 The Bernabéu is one of the real bucket lisrt entries when it comes to football stadiums around the world. Photo: Quality Sport Images/Getty Images

The Bernabéu is a real bucket list entry when it comes to sporting grounds. The home of the most successful club in European history is one of the best places in the world to watch football and, if you fancy doing just that, then here is all you need to know.

Ryanair will generally be the cheapest option and with an early morning flight each day you will be in the city well before lunchtime.

Indeed, it is quite possible to do a day trip to the Bernabéu without staying over if you wish. Ryanair and Aer Lingus both offer flights on Saturdays and Sundays which leave before 6.30am, meaning you arrive in Madrid around 10am.

La Liga kick-off times are spread right across the weekend and while some of them are either too early or too late for the flight times, the 4pm and 6pm games on a Saturday and the 4pm games on a Sunday can fit the schedule.

Real Madrid do occasionally play at home at those times (their first home game of the season is at 6pm on Saturday August 24th against Real Valladolid) and with Ryanair flights back to Dublin at 10.15pm on a Saturday and 9.30pm on a Sunday, it leaves time to get from the ground back to the airport.

It’s worth noting that La Liga kick-off times are not fully confirmed until only a few weeks before the game so keep an eye on the Real Madrid website.

Unlike many modern stadiums which are located well outside the city in nondescript surroundings, the Bernabéu sits within the city centre limits of Madrid on the Paseo de la Castellana.

Metro line 10 services the Santiago Bernabéu stop which is right across from the stadium and that is the best line to get from either Plaza de Espana or Tribunales in the city centre.

If you’re coming directly from the airport, metro line 8 is the best to take, getting off at Nuevos Ministerios. From there the Bernabéu is a 10 minute walk or one stop on line 10 which you can connect to at the station.

For the most part, Real Madrid games don’t sell out unless they’re playing Barcelona, Atletico Madrid or it’s a big Champions League tie. Therefore, tickets for the Bernabéu can be got easily enough.

For most matches they will go on general sale on the Real Madrid website about a week before the game. Tickets can also be bought from the ticket booths at the stadium if they have not sold out.

For the cheapest tickets you can expect to pay about €30 but bear in mind that you will be right at the top of the stands which are seriously steep. Better located tickets will go up to about €120 if bought directly through the club.

There are plenty of hotels around the Bernabéu including chains such as Holiday Inn and Marriott. However, if you’re staying over you’re better off staying further south towards the Plaza Mayor which is the main square in the city and near all of the tourist sites.

– Real Madrid fans absolutely love sunflower seeds. It could be a way to control nerves or just a habit but when you’re in the Bernabéu you’ll hear the constant chatter of fans chewing on sunflower seeds which can be bought in huge bags on the concourse. Beware as well when you’re leaving the stadium to be careful walking because the ground is just a sea of slippy discarded shells.

– Make sure to give yourself plenty of time getting to the ground – remember that there are 80,000 people going to the same place. The Metro gets extremely busy which means you may not get the first one that arrives while queues at the gates to the ground also build quite quickly.

– Depending on what time of year you go you may be surprised at the weather. Madrid in the winter is not like your Spanish summer holiday. The city can get quite cold and, while the lower tiers of the Bernabéu have huge outdoor heaters on the roof, it is worth bringing a warm coat.

1 Brentford eye €178m windfall with Premier League promotion
2 James Ryan injury could open the door for Ryan Baird
3 Shane Lowry finds some welcome form as US PGA looms
4 The shuttle run that will get you to your desired fitness destination
5 Ken Early: Frank Lampard’s problems start at number one
Real news has value SUBSCRIBE
Crossword Get access to over 6,000 interactive crosswords