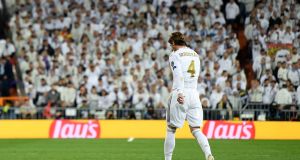 The Manchester City fans high in the north-east stand of the Bernabéu who belted out Blue Moon weren’t the only ones who had enjoyed watching Real Madrid lose on Wednesday night. For Barcelona supporters, any defeat for their rivals is to be celebrated and all the more so if it is inflicted by Pep Guardiola, but this carried still greater significance, bringing a surge of hope. As City fans sang in the stadium, 370 miles away Sport prepared its front page. The picture showed the manager pointing, by the headline: “Pep, you show us the way.”

Four days later Barcelona follow City into the same arena seeking the same outcome. From Guardiola to Lionel Messi, it is the stuff of nightmares for Madrid. Their vulnerability suddenly exposed, there were lessons for others to learn. Sport hoped so, certainly, and was not alone. Below the City fans, sitting in a glass-fronted box was Quique Setién and the Barcelona manager’s assistant, Eder Sarabia, working towards their first clásico.

At the end they headed to their hotel. A few kilometres north up the Castellana, the hotel stands where Madrid’s former training ground once did and towers over the city. It is where Barcelona stay; it is also where City stayed. Setién and Guardiola do not only share a footballing philosophy. In the late summer, Setién spent time in the UK and visited Guardiola, attending the Etihad for the draw with Spurs in August. Late on Wednesday they shared a glass of wine and a long conversation. Setién and Sarabia flew back the next afternoon, armed with additional insight on their opponents.

There is much to analyse, not least what has happened to Madrid over the last month. They have won one of their last five games. They were knocked out of the Copa del Rey by Real Sociedad, conceding four at the Bernabéu, while a draw against Celta and a defeat at Levante last weekend produced a five-point swing in seven days and let Barcelona go two points clear. After defeat at Levante Zinedine Zidane said: “Our season is at stake this week” – first City, then Barcelona. It was a time for “tíos”, Sergio Ramos said: blokes, real men. Madrid had to “thump a fist on the desk”.

“The hour of truth has come,” Ramos added, but the truth hurt. With Setién watching, City beat them, the first part of the season at stake slipping away. Guardiola, whistled throughout, won at the Bernabéu for the sixth time. And now comes Messi. “If football was a religion, Messi would be our God,” Martin Braithwaite, the emergency signing from Leganés, said. For Madrid the Argentinian is the antichrist, the player who has done them more damage than anyone else ever.

At a time such as this, too. The memory of this time last season already lingered; now it is on their minds even more. A year ago Madrid lost it all in eight Bernabéu days, their season over three months early: knocked out of the cup by Barcelona and the Champions League by Ajax, they lost the clásico 1-0, extinguishing any hope in the league. It was a significant exaggeration when Marca called memories of that a “psychosis” on Monday; it was less of one by Thursday.

The solidity and reliability that had defined Madrid, unbeaten in 15 league games until going to Levante, gave way to a vulnerability that is even more of a problem considering how few goals they are scoring: Karim Benzema has two in 13 games, Gareth Bale has three in 25, Luka Jovic two in 23, Vinícius three in 37. Eden Hazard, injured against Levante, will miss two months. On the same day Messi scored four and Barcelona fans discovered that Braithwaite might be useful after all.

Barcelona have scored 16 goals more in the league alone. The Bernabéu, where Jorge Valdano said opponents routinely suffered “strange fright”, is now a place where Ramos admits “the lack of tranquillity the fans have reaches players too”. Madrid have won only nine of 17 home games this season.

Nor is it only this season. Barcelona have won their last four league visits, eight of their last 11 trips in all competitions. That run includes a 6-2, a 2-0, a 3-0, a 3-1 and a 4-0. Add another defeat and Madrid would be five points behind, plus the head-to-head record, with 12 games to go. As for Setién, this may be his first clásico but he has been to the Bernabéu three times and not lost, winning his last two visits with Betis.

All of this is being remembered now, thrown into the mental mix. Barcelona are presented with an opportunity to deliver a potentially decisive blow. Madrid are presented with an obligation, Marca calling this is a clásico “with no safety net”. Madrid cannot lose, just as they could not lose on Wednesday. “After a hard night I see two options: we can think about yesterday’s defeat or work towards tomorrow’s victory,” Ramos wrote on social media. “I chose the latter. Head and heart immersed in the clásico as of now.”

“White panic,” cheered the cover of El Mundo Deportivo. “Panic at the white house,” declared Sport, gleefully. Pride before a fall is a lesson they stubbornly refuse to learn and that euphoria had not been there the day before. City’s win brought a wave of optimism not provided by Barcelona’s own performance, a 1-1 draw at Napoli. The leaders, too, have their problems, more even than their rivals. It is not as if they are reliable, still adapting to new methods having sacked a coach mid-season for the first time in 17 years.

These are old teams – a dozen over-30s between them – and at Barcelona the division between board and squad runs deep, the institutional crisis, too. “The team has propped up the club,” Gerard Piqué said. Doing so now is harder than ever. Piqué will play despite an ankle problem but Jordi Alba, Sergi Roberto, Luis Suárez and Ousmane Dembélé are out, leaving Barcelona with 16 first-team footballers; in the second leg against Napoli, it will be 13. “That’s the planning, unfortunately,” Sergio Busquets said, pointedly.

Messi admitted that at the moment Barcelona are not good enough to win the Champions League, where they have won two of their last 10 knockout games away. Wednesday posed the question of whether Madrid are either. For now the issue is more immediate: are they good enough to win the clásico? If “good” is the word. This is supposed to be the greatest game there is but neither team seems to fit that bill now. On Thursday night two radio shows ran the same debate. Not: “Who comes into the clásico in the better shape?” but “Who comes into the clásico in the worse shape?” Sunday’s meeting, Valdano suggested, is like a race between two injured men limping towards the finish line. – Guardian