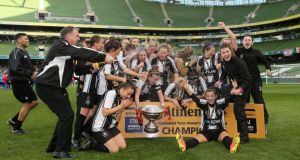 Holders Raheny United were pushed all the way by newcomers UCD Waves to claim their third FAI Women’s Cup in a row courtesy of an extra-time winner.

Siobhan Killeen, a medical student at UCD, grabbed the all-important winner at the Aviva Stadium six minutes into extra-time after she latched onto a through ball and beat Monica McGuirk from an acute angle despite the goalkeeper getting a hand on the effort.

The meeting of the two favourites for the League title couldn’t be decided in normal time as Áine O’Gorman cancelled out Katie McCabe’s stunning opener for Raheny.

Speaking afterwards, United manager Casey McQuillan admitted his side had to be patient to see off the latest challengers to their crown.

“It was an even enough game but I thought we shaded it,” he said.

McCabe’s 14th-minute opener was one of the best goals seen at the venue, her delightful 40 yard free spearing into the top corner.

UCD’s international regulars Julie-Ann Russell and O’Gorman combined three minutes before the break to muster an equaliser. When Russell’s shot rebounded off the crossbar, there was O’Gorman to swivel in an instant to finish from six yards.

Eileen Gleeson’s southsiders edged the chance count in the second half, with Dora Gorman’s shot 14 minutes from the end that clattered the woodwork the closest of them.

Still, once Raheny regained the lead in extra-time, they were calmness personified. Noelle Murray might even have extended their winning margin in extra-time only to be twice denied by the crossbar.

1 Munster to open up Pro 14’s Monday night rugby schedule
2 Gordon D’Arcy: Losing such a big game shines a very harsh light on certain players
3 Seán Moran: Fallout from Tyrone final celebrations will concern GAA
4 The Offload: Saracens prove Pro14 is not fit for purpose
5 Ken Early: Like Napoleon, Mourinho is the outsider always trying to prove himself
Real news has value SUBSCRIBE
Crossword Get access to over 6,000 interactive crosswords