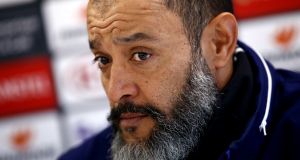 Wolves head coach Nuno Espirito Santo: “We were the first team to start our season and we want to be the last to finish it.” Photograph: Tim Goode/PA

All good things must come to an end, apparently. But Wolves’ season, which began nearly 13 months ago, is still going and their manager, Nuno Espírito Santo, wants it to continue for another couple of weeks even though that will blur the division between this season and the next one.

On Thursday Wolves host Olympiakos in the 58th game of their campaign, the return leg of a European tie whose first instalment took place in March. If Wolves capitalise on their 1-1 away draw, they will advance to the final stages, which kick off in Germany next week and conclude in Cologne on August 21st.

“We were the first team to start our season and we want to be the last to finish it,” said Nuno.

The prospect of winning a trophy, especially one that comes with the gleaming bonus of a ticket into next season’s Champions League, is a powerful incentive to keep playing.

Nuno appears resigned to the fact that that will come at a cost despite the Premier League indicating that in the event of progress in the Europa League, Wolves and Manchester United will be allowed to start their next domestic campaign after other clubs resume on September 12th. Nuno does not expect any delay to be long enough for his players to recover adequately from the physical and emotional toil of this season.

“They will not get a proper break,” said Nuno. “If you look back at previous years, previous seasons, even at players involved in national teams, three weeks [holiday between seasons] is good. But I don’t think it’s going to be possible.”

That will only become a serious problem if Wolves progress on Thursday, an outcome Nuno is not taking for granted. Olympiakos beat Arsenal at the Emirates in February after losing their home leg.

What is more, their confidence is high, having been crowned Greek champions for the 45th time in June, whereas Wolves missed out on a top-six domestic finish following the final day defeat at Chelsea.

Wolves have cause for optimism, too, especially as they have been fed insider information by Daniel Podence, the striker they signed from Olympiakos for £17m in January.

“He knows their team very well and has spoken to us about them and how they play,” said the Wolves midfielder Leander Dendoncker.

“It’s always interesting to have someone like that. He said they are very strong away from home with a very good strategy. It’s about their collective. They are very disciplined.”

Dendoncker and Nuno insisted there was no question of Wolves setting out for the 0-0 draw that would confirm their progress.

Wolves are at full strength but Olympiakos could be without two key players. Defender Ruben Semedo is suspended after being sent off for fouling Diogo Jota in the first leg, and the goalkeeper José Sá is a serious doubt because of a hand injury.

Sá has been linked with a transfer to several Premier League clubs, including West Ham, and has been described as “a fantastic goalkeeper and a fantastic boy” by Nuno, who managed him at Porto.

Unless his injury has been exaggerated for bluffing purposes, Sá will not play and will be replaced by Bobby Allain, a France-born 27-year-old who has made only three senior appearances for Olympiakos since joining from Dijon last year. Wolves will look to test his ability and nerve.

The Scotland manager, Steve Clarke, will be among the interested viewers, as Allain holds a British passport through his Scottish mother.