No disgrace in defeat for second string 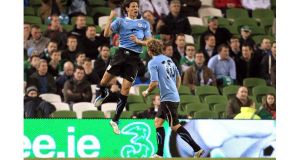 Rep of Ireland 2 Uruguay 3:That’s entertainment. Whether or not it will do them any good or not remains to be seen, but the reserve platoon narrowly beaten by Uruguay at the Aviva Stadium this evening at least gave value for money. It’s just a pity there were was barely anyone here to see it.

After Giovanni Trapattoni made eight changes to his side and adopted an experimental line-up, with five in midfield, the smart money was on a comfortable win for the World Cup semi-finalists. It would have paid out, but there was nothing routine about the South American’s victory.

Their three goals came in the first half, two from gifts and the second from the refusal of three Irish players - Andy Keogh, Keith Fahey and Darren O'Dea - to tackle Maximiliano Perreira before he slipped a ball in for Edinson Cavani to finish sweetly.

It was a feature of the opening period; punishment of Irish mistakes that undermined a confident start. In fact, the manner in which it was inflicted highlighted exactly why the manager is so reluctant to deviate from 4-4-2, but there was much to be positive about, especially after the break.

Concerning, however, was James McCarthy’s lack of impact playing in the hole behind the outstanding Shane Long. The man who seemingly holds the key to the possibility of a Plan B, did not heed his manager’s advice and take control of the game. He showed neat touches and passed well but occasionally looked lost before being replaced by Keith Treacy in the 66th minute.

Instead, Andy Keogh grew into the game and provided a neat foil for Long, who ran the channels all night, created openings and headed Ireland’s equaliser in the 15th minute from Liam Lawrence’s cross after Diego Lugano swept Uruguay into the lead three minutes beforehand.

There was an element of luck to the visitors' goal after Keith Fahey tamely headed Diego Forlan’s cross against the back of Cavani before the Uruguayan captain swivelled to fire past Keiren Westwood.

Long did brilliantly to set up his goal minutes later when controlling a punt and feeding Paul Green before darting into the box. When Lawrence cut back to cross on his left the Reading striker rose above Martin Caceres to head home from close range.

Keith Fahey went close soon afterwards, when he possibly should have fed McCarthy out wide, and the Uruguayan lead was soon restored by Cavani.

Ireland’s defence, including Westwood, had a total of 36 caps between them before this evening and it showed, at times, in the face of the sublime attacking threat posed by Cavani, Diego Forlan, and new arrival Abel Hernandez. The replacement for Luis Suarez had already looked a class act before adding the third five minutes before the break.

He clipped the ball into the bottom corner exquisitely, but it was Lawrence’s ball watching after a risky Fahey pass in midfield that allowed Alvara Perreira nick possession and split the defence for the Palermo striker. It was the sort of stuff that gives Trapattoni sleepless nights.

To his credit, Fahey and co picked themselves up and the former St Patrick’s Athletic man drew Ireland level two minutes after the break. His ball down the channel was picked up by Long, who skinned Godin for pace and cut the ball back for McCarthy. Caceres' tackle not only took the Wigan player out but also felled Keogh.

Fahey took repsonsibility and despatched the spot kick into the bottom right-hand corner.

Keogh finally got a bit of luck when his dribble come back off the heals of Caceres but his thunderous shot was punched by Fernando Muslera into the path of Long. The frontman could not react quick enough and directed it over the bar.

Long then blocked down Caceres’ clearance and it fell to Lawrence, whose drive was deflected away off Godin.

Treacy was lively after his introduction and again called Muslera into action after a combination of backheels involving Long and Keogh gave him a sight of goal.

Ireland’s ambition was always likely to leave gaps at the back and Ciaran Clark, who had dealt ably with the Uruguayan attack and even got forward on occasion, was caught up field 20 minutes from time when Hernandez found Cavani in space. The Napoli striker tried to chip Westwood but the goalkeeper palmed his effort away before bravely denying Hernandez on the rebound.

Lawrence then reacted well to head Forlan’s corner off the line before Ireland spurned the best chance of their game when Muslera fumbled Treacy’s free into the path of Keogh, who somehow headed into the side netting from two yards out.

Man-of-the-match Long provided another chance for his team-mate but his low cross evaded Keogh’s outstreched boot.

The confidence never waned from the home side and was aided by Aiden McGeady’s late arrival, but even the Spartak Moscow man couldn’t manager to manufacture a deserved equaliser.