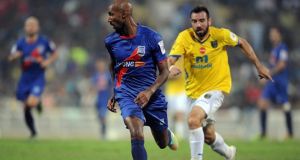 Nicolas Anelka has been named player-manager of ISL side Mumbai City. Photograph: Getty

Indian side Mumbai City have named Nicolas Anelka as their player-manager.

The Indian Super League club announced the 36-year-old into the role on Friday morning.

Anelka has also taken the role of Mumbai’s marquee player — replacing Freddie Ljungberg — which means he is eligible for a higher salary.

Having started his career with Paris St Germain, Anelka went on to play for — amongst others — the likes of Arsenal, Real Madrid, Liverpool, Manchester City, Chelsea and Juventus.

His last English side was West Brom who terminated his contract in 2014 in the wake of a suspension after he performed the controversial ‘quenelle’ gesture when celebrating a goal.

“I would like to say thank you to the Mumbai City FC staff for giving me the opportunity to coach the club,” Anelka said.