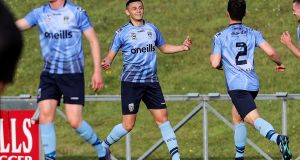 Despite the loss of several key players following an 11-match losing run that saw them slump four points adrift at the foot of the table 10 days ago, two wins and a draw from their last three matches since now has Collie O’Neill’s Students three points clear of bottom side Finn Harps.

Unchanged from their 0-0 draw in Derry on Friday, UCD started confidently and got what would prove the game’s only goal from the first attack of the night on eight minutes.

It was all Mahdy’s own work as he harried James Finnerty to snatch the ball off the Bohemians’ defender.

The UCD striker then got his head up to hit a crisp right-foot shot to the top corner from some 25 yards for a cracking fifth league strike of the season.

Danny Mandroiu, who scored a terrific goal in a 2-0 win here in February, was proving Bohemians’ chief threat, firing over from a free kick on 17 minutes before scuffing a shot wide across goal from Keith Ward’s clever pass.

Mandroiu soon returned the compliment for Ward to cross for Kevin Devaney at the back post with his drive saved by the well-positioned Conor Kearns.

Finnerty was close to redeeming his early lapse on 41 minutes, but his shot scarcely troubled the UCD keeper.

Mandroiu then had another chance from Ward’s quick free kick in first half stoppage time; Evan Farrell was alert to the danger to nick the ball off his toe.

Ward’s clever lob brought a finger-tip save from Kearns seven minutes into the second half as Bohemians upped the tempo.

Kearns was there again on 70 minutes back-pedalling to tip over his crossbar after Mandroiu worked space for a left-foot shot.

Bohemians pressed to the death, their last chance came five minutes into added time when Darragh Leahy met Wade Slater cross. But the header was straight at Kearns.