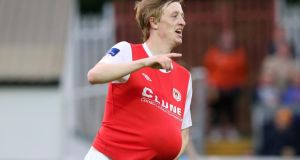 A hat-trick from Conan Byrne was the highlight as St Patrick’s routed Drogheda United at Richmond Park.

For Liam Buckley’s St Patrick’s, it now sets up the last league game before the summer break when his side travel to Oriel Park on Friday week to meet in-form leaders Dundalk.

The rout began as early as the fifth minute when Keith Fahey’s ball opened Drogheda up down the left to find captain on the night Ian Bermingham.

His pull-back exposed negligent marking as Chris Forrester had ample time to control the ball and find the top corner despite Dave Ryan getting a hand to the shot.

St Patrick’s scored again on 16 minutes when Fagan casually flicked home his 13th league goal of the season and he might have added to his tally as the league’s leading scorer on 37 minutes, hooking over the top as Ryan could only help on another Byrne cross.

St Patrick’s did get a fortuitous third goal five minutes before the break as Byrne’s in-swinging cross deceived Ryan to end up in his net.

A delightful move brought a fourth goal three minutes into the second half. Fahey linked with Conor McCormack who passed to Fagan to put Forrester in to drill a shot past Ryan.

It was 5-0 on 66 minutes. Drogheda stepped out to try to play offside and Byrne ran through on to

Mark Quigley’s ball to shoot his second of the night to the corner of the net.

With Brennan off injured after all their substitutes had been used, St Patrick’s added to their tally with ten men on 86 minutes. Bermingham crossed for Byrne to complete his hat-trick.