St Patrick’s aiming to consolidate their position at the top

Leaders in good spirits as they head to Limerick 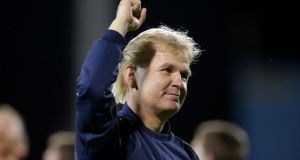 St Patrick’s travel to Limerick this evening hoping to build further on their impressive away form and open up a five-point lead on second-placed Dundalk ahead of the latter’s derby with Drogheda United at Oriel Park tomorrow afternoon.

“It’s great that the team are back at the top,” said Buckley.

“We’ve got this game, (Shamrock) Rovers in the cup after that and play Dundalk in the league the week after. So there’ll be no easy games left this season.”

The one blot on the win at the Brandywell was Stephen Maher breaking his leg while Buckley will give fellow midfielder John Russell every chance to prove his fitness following an ankle injury.

Former Bohemians midfielder Joseph Ndo is in line for his 100th league appearance for Sligo at Dalymount Park. The influential Dave Mulcahy returns to Bohemians’ midfield as they host Rovers at Dalymount Park. Striker Dave Scully remains out with an ankle injury.

Evan McMillan, Ross Gaynor and Iarfhlaith Davoren remain injured out for Ian Baraclough’s champions while Pascal Millien is on international duty with Haiti.

This afternoon’s game between Derry City and Shelbourne at the Brandywell was postponed yesterday due to Barry McNamee being called up to the Republic of Ireland under-21 squad.