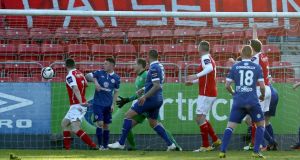 So, it would seem we might have a league race after all, with the defending champions not only beaten for the first time in the league last night at Richmond Park but utterly outplayed by a St Patrick’s side who dominated from beginning to end and comfortably deserved their win.

Conan Byrne got the home side’s first from close range midway through the first half, Killan Brennan their second from the spot late in the second by which time the visitors had been reduced to 10 men. In reality, though, they were second best from beginning to end of a game that several of Sligo’s other rivals will look at with interest.

“We played well over the 90 minutes,” said manager Liam Buckley afterwards. “We pressed them well in the first half, stood off them a bit more in the second but then it’s difficult to keep that up for the whole game and I’m happy with the way we played. It’s great to win; it puts us right back in the mix.”

It goes a long way towards tightening up things at the top and after their Setanta Cup defeat in midweek, it leaves Ian Baraclough’s side needing to get going again. They had arrived as favourites but after three straight wins it was the momentum of the locals that showed with Buckley’s men taking control from early on. In midfield they worked tirelessly to unsettle the visitors and were rewarded with a steady stream of mistakes as the pressure took its toll.

Making his first league start of the campaign, a rusty looking Danny Ventre contributed a couple of times as Rovers got themselves into trouble around their own area. Their bigger problem, though, was their inability to push the proceedings out of their own half.

Ventre, and the likes of Lee Lynch, did their best to move things forward but with little success. The home side’s central midfield, anchored again to good effect by Greg Bolger, edged just about everything and on the odd occasion Rovers did get behind them, the defence looked solid with Kenny Browne particularly impressive.

Both fared well
The big centre-half shared the task of containing Anthony Elding with Conor Kenna and both fared well against the big Englishman. Browne, though, also played a key part in his side’s breakthrough goal after 22 minutes when Brennan’s corner from the right found the 26-year-old on the edge of the six-yard box and his headed flick on came back off the inside of the post before Byrne stepped in to poke it home.

Buckley’s side continued to have the better of things from then until the break but the question was whether they could maintain such high energy stuff after it against a team that had only fallen behind once previously in the league but, on that occasion, had battled back to win.

This time, though, they simply weren’t allowed back into it although they’ll point to the bigger refereeing decisions made late on as having contributed to their downfall. As they tired, some of the home side’s play became a little less accurate and the pressure they exerted less sustained but they still managed to make life uncomfortable for their opponents for stretches while creating the game’s better chances.

The best of them fell to Ian Bermingham and Anto Flood’s replacement, Christy Fagan, who both missed badly. At that stage the Sligo fans must have thought there was still something in the game for them.

They threatened to turn the tide a couple of times but their hopes of salvaging something were exploded in the space of a couple of minutes late on, with Iarfhlaith Davoren sent off for what referee Neil Doyle clearly reckoned was a reckless challenge on Brennan who then spooned a penalty past Gary Rogers after Evan McMillan was adjudged to have taken down Byrne inside the area.
ST PATRICK’S ATHLETIC: Ryan; O’Brien, Kenna, Browne, Bermingham; Bolger; Byrne, Brennan, Russell, Forrester; Flood (Fagan, 77 mins).
SLIGO ROVERS: Rogers; Keane (Peers, 68 mins), Henderson, McMillan, Gaynor; Ventre; Djilali (Millien, 57 mins), Cawley, Lynch, Connolly (Davoren, 75 mins); Elding.
Referee: N Doyle (Dublin).