League leaders have strikers back for trip to Bray Wanderers 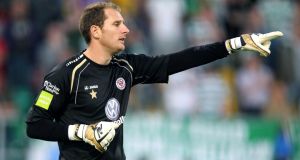 Gary Rogers: “People made a lot of the couple of draws we’d had before Monday,” said the Sligo Rovers goalkeeper. Photograph: Inpho

Having returned to form with a dramatic win over Derry City that jumped them back to the top of the table, Sligo Rovers head to Bray this evening determined not to undo all the good work.

“People made a lot of the couple of draws we’d had before Monday,” said goalkeeper, Gary Rogers, “but if you look at it, we conceded against Drogheda in the 95th minute and against Shamrock Rovers in the 85th so the reality is that we went very close to winning both of those games and if we had we’d be in a very comfortable position now.

“As it is, it was a nice confidence boost to beat Derry but we won’t be taking anything for granted now; we really struggled against Bray last year – we drew one game one all and another nil all – so we know better than to make that mistake.

“They have good players all over the place and so they’ll be tough. The only thing is that if we go up there and play the way we can then we know that we should be capable of beating them.

Wanderers are close to full strength for the game with just Shane O’Neill expected to miss out while the visitors will again be without Séamus Conneelly and Danny North, both of whom are reckoned to be a couple of weeks off returning but after playing Aaron Greene up front last time out, Ian Barraclough does have Anthony Elding back from suspension and Raffaele Cretaro available again after injury.

A win for Sligo would ensure they stay clear at the top of the table and put Derry under additional pressure to bounce back from last weekend’s defeat with a win over UCD.

The students conceded six the last time the two sides met but head into this game with good wins over Shamrock Rovers and Bohemians having restored a bit of confidence.

Martin Russell may have been a little fortunate with regard to key refereeing decision on Tuesday night but the reality is that 1-0 gives them just a little leeway this evening as they take on a side they had a good record against last season.

Mick Leahy, Ger Barron and Mark Langtry are out injured on this occasion but then Declan Devine has problems of his own with Ruaidhri Higgins (hip), Paddy Kavanagh (hamstring) and Thomas Crawley (groin), who are all out, and Shane McEleney is suspended again.

Kick-start season
Shelbourne head to Oriel Park hoping for the sort of performance and result that might kick-start their season after what has been a terribly poor start. At first glance, a win and two draws in their last four outings does not look too bad but their defeat by Bray this week will have robbed them of the sense that they were starting to turn a corner.

Alan Mathews is not helped by the fact that Robert Bayly is suspended again. He joins Niall Burdon, a long-term absentee, on the sidelines this evening but things may get a good deal worse if Paul Crowley, Seán Brennan, Dean Kelly and Mark Leech – all of whom are doubts – end up failing late fitness tests.

For his part, Stephen Kenny will be without Chris Shields once more while Mark Rossiter is a doubt but John Dillon is fully fit again and Vinny Faherty is in contention to feature.

The night’s other top-flight game involved Bohemians and Cork City, with the latter travelling to Dalymount Park in the hope of improving on what has been another couple of disappointing results.

Darren Dennehy misses out through suspension while Tommy Dunne will again have to cope on the road without Kevin or Dan Murray.

Brian Lenihan is also out but Daryl Kavanagh and John Dunleavy return for a game against the Dubliners who themselves have Keith Buckley suspended but Stephen Traynor back in the squad.