Shelbourne without a win in six after Finn Harps draw 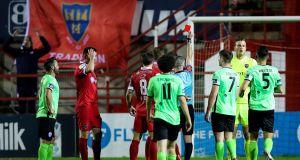 Barry McNamee’s first goal for Finn Harps salvaged a point at Tolka Park as Shelbourne were left fuming with the sending off of Luke Byrne.

Shelbourne are now without a league win in six since beating Harps in Ballybofey early last month.

The Donegal side left Drumcondra happy as the draw edges them a point ahead of Cork City at the foot of the table.

Shelbourne dominated from the start, fully deserving of their 33rd minute lead when a Georgie Poynton corner was headed home by Ciaran Kilduff.

Revitalised from the resumption, Harps levelled on 54 minutes.

Colin McCabe could only parry a stinging drive from Mark Russell leaving McNamee to side-foot home the loose ball.

Shelbourne were then left incensed by referee Sean Grant on 76 minutes when defender Byrne was shown a straight red card for what looked an innocuous nudge on Alexander Kolger just outside the area.