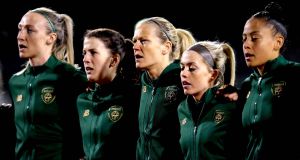 Has been with Braga in Portugal since last year, having had earlier spells with Chelsea, Manchester City and Brighton, amongst many others.

Represented her native United States at under-23 level before declaring for the Republic in 2018. Was playing in France before joining West Ham last year.

The former national diving champion, who has won multiple honours at home with Raheny United and Peamount, made her senior Irish debut in 2014.

Already a qualified physiotherapist, Scott is now in her third year of studying medicine at Keele University. Was the 2018 Irish Player of the Year.

The 2019 Player of the Year has been a regular at the heart of the defence since making her debut 12 years ago. Joined Fiorentina from Arsenal during the summer.

Her career has taken her to the United States, where she was on a scholarship at Hofstra University, Iceland, Norway and Germany where she now captains SC Sand in the Bundesliga.

Played Gaelic football and camogie for Limerick before focussing on soccer, her big break coming when she was signed by Bundesliga side MSV Duisburg in 2018.

Retired from international football in 2018 after winning 100 caps, but returned to the Irish set-up in March of this year.

A three-time Irish Player of the Year and former Galway Gaelic footballer, Fahey is now captain of Liverpool after earlier spells with Arsenal, Chelsea and Bordeaux.

One of the National League’s stand-out players, the former Irish Under-17 captain made her senior debut away to Greece last November.

Having enjoyed a hugely successful spell in the United States, O’Sullivan made her English Super League debut last weekend with Brighton who she has joined on loan.

This is the American’s first call-up to the squad after her club manager Lisa Fallon informed Vera Pauw that she has an Irish passport, courtesy of her Limerick-born grandparents.

The former Irish under-19 captain, who was named the 2018 Under-19 Player of the Year, made her senior debut against Belgium last year.

Another to have come through the American scholarship route, Connolly joined Brighton last year after four successful years at Florida State University.

After a successful spell in the United States, where she was on a football scholarship at the University of Hartford, Nolan joined London City in August.

Another widely-travelled member of the squad, the former Scottish youth international joined Leicester this summer from West Ham.

Molloy only turned 16 in June, but such has been her form for Wexford Youths in the new season, she has earned her first senior call-up.

A key member of the senior team since making her debut in 2015, the versatile Irish captain has also established herself at Arsenal where she signed a new long-term contract last year.

Took the reverse route to many of her team-mates, moving first to England to Bristol City before taking up a scholarship in Florida where she plays in division one of the national college league.

Scored an FAI Cup final hat-trick for Shelbourne when she was just 17 and was brought in to the senior Irish squad in the same year. Joined West Ham in 2018.

A prolific goalscorer for Peamount United, Barrett earned a move to Germany’s Koln last year, signing a contract extension with the club during the summer.

Another who scored goals for fun during her time with Wexford Youths, Jarrett, whose career has been blighted by serious injuries, moved to Brighton back in January.

Declared for Ireland earlier this year and made her debut in March in the 3-0 Euro qualifier win away to Montenegro. Plays with HB Hoge in Denmark.