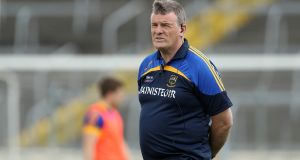 Tipperary manager Liam Kearns has refused to comment on the club row affecting a number of his players – as Shannon Rovers became the fifth team to be expelled from their local hurling championship.

A sixth could follow as Moyle Rovers, who provide captain Peter Acheson, full-back Alan Campbell, reserve goalkeeper Ciaran Kenrick and back-up midfielder Martin Dunne to the county senior football squad, are waiting on the South Board to decide their fate.

Following confirmation from the West Division that Golden-Kilfeacle, Arravale Rovers, Rockwell Rovers and Lattin-Cullen Gaels have been expelled from their intermediate hurling championship, Shannon Rovers have also been thrown out in the North. Shannon Rovers player George Hannigan is a key midfielder with the senior footballers and has also played intermediate hurling with Tipperary in the past.

To further complicate matters, Hannigan is the son of Joe, current chairman of the Tipperary football board.

All clubs affected by this dispute refused to fulfil weekend hurling fixtures after their county football squad members met collectively and decided not to play. That decision was backed by their clubs, but the punishment by local boards is expulsion from the divisional competitions, who will point to the fact that the games fell outside the 13-day rule that can be invoked by county managers.

It’s also been pointed out that Kilruane MacDonagh’s player, Niall O’Meara, lined out for his club against Brendan Maher and Dan McCormack’s Borris-Ileigh in a North SHC quarter-final, just a fortnight before Tipperary’s All-Ireland semi-final against Galway.

When asked about the club situation, Kearns said: “I’ve no comment on that, to be honest. We’re preparing for an All-Ireland semi-final and that’s something that was decided between clubs. It’s outside our remit.

“We’re not just getting into it. As far as I’m concerned, that’s taking away from our preparations for the All-Ireland semi-final.

“We’re concentrating on our preparations for the All-Ireland semi-final. Neither I, my management team or my players will be commenting on it.”

The four West Tipperary clubs involved were due to meet last night to discuss their options – and a possible appeal.

Meanwhile, Kearns confirmed that defender Jimmy Feehan, from Killenaule, has postponed a work placement in New Zealand several times as Tipp progressed to an All-Ireland SFC semi-final against Mayo on August 21st.

Kearns said: “The flight is being cancelled each time we progressed. It’s the same story now – he’s due to go out after the semi-final, but if we go to the final, then he’ll be cancelling the flight again and staying.

“It’s a work placement. He’s going to New Zealand to do it. Fortunately, we’re able to do it. He’s in UCD. They’ve been understanding about it.”