Rovers thrown lifeline when defender tripped Waters inside the area 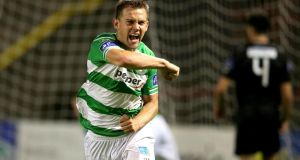 Pat Fenlon’s side are now seven points behind third-placed St Patrick’s Athletic, whom they meet at Richmond Park on Friday.They have played one game less than St Patrick’s.

Pender had finally ignited a dreadfully poor derby 18 minutes earlier with the goal it cried out for, the right-back bursting through into the area to blast a shot to the roof of Barry Murphy’s net.

Bohemians would not have been flattered to have won it and almost did so a minute from time but for the save of the night from Murphy, who turned Steven Beattie’s header round a post.

Despite having nothing tangible to play for, Owen Heary’s side were no less fired up for the visit of their arch-rivals, starting forcefully in pinning Rovers in their own half.

Rovers had to work hard to get into the game. They did so, but all they had to show for their first-half graft was a chip from their right-back Simon Madden which was off target.

Rovers were far more purposeful on the resumption.

Gary McCabe was over the top with a free kick before the winger powered a right-foot drive wide of a post.

But Bohemians played their way back into it with the game’s first clear-cut chance on 63 minutes. Mulcahy headed over from Pender’s cross before the fullback’s goal heralded the overdue drama.