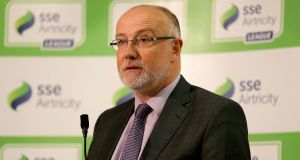 Airtricity League director Fran Gavin said last week at the launch of the league’s ‘Brand Report’ that the board would vote on any changes at Tuesday’s meeting. Photo: Inpho

The board of the FAI is due to ratify a new league structure for 2018 when it meets on Tuesday evening with two divisions of 10 widely expected to be the preferred option. But a number of clubs have said that they are unsure of how the association has arrived at this point and some are complaining that they were not even consulted during any process.

League Director Fran Gavin said last week at the launch of the league’s ‘Brand Report’ that the board would vote on any changes at Tuesday’s meeting. With the leading members of the Premier Clubs Alliance (PCA) having agreed “in principle” to a 10 team top flight, this seems set for adoption but few seem to have believed that that agreement was binding and others, mainly from the first division, are annoyed that they were not involved in any meaningful way in the decision making progress.

Shamrock Rovers have consistently been in favour of a reduction in the size of the top flight but the process on this occasion appears to have been driven by the PCA in which St Patrick’s Athletic have been key players.

Their concerns have centred not just on the size of the league’s two divisions but on what is seen as the hugely restrictive nature of the Participation Agreement, long an irritation to clubs who must agree to a string of draconian conditions laid down by the FAI.

The clubs are obliged not only to uphold these rules themselves but also to take responsibility for their employees towing the line with potential punishments extending all the way to expulsion. No public criticism of any sort by the club or its employees is permitted and all of the provisions for disputes are stacked heavily in the association’s favour.

On the financial front, the Agreement provides that: “The Club hereby acknowledges that the FAI has invested considerable money and resources into the development and operation of the League which has benefitted / will benefit the Club through its participation in the League.”

That the club must participate in the league in order to survive is obvious but the extent to which they benefit from the association’s commercial deals is a point of significant contention and figures in a discussion document compiled by accountant Kevin Burke, a long-time UCD fan who is also Bray Wanderers’ financial controller, which shows that that club paid out around 50 per cent more to the FAI in 2015 than it received back in direct funding.

Burke has looked at both funding models and formats in a number of other leagues and made a wide range of proposals. These include major alterations to both the league and cup structures as well as substantially improved funding of the club by the FAI. He also places an additional emphasis on youth development at a time when, he believes, the evidence points to major problems with the traditional routes from the youth game to senior international football.

With regard to club funding, Burke suggests that the association provide far more money, around €2 million extra to clubs each year by way of additional prize money spread across the various club competitions. But, he argues, Abbotstown would ultimately get a cut of European prize money and transfer fees generated as clubs improve and their players become more marketable.

“I am not just saying that I want them to give the clubs money, although obviously I do want them to do that,” he says. “I am also saying there is a potential payback built into this. It should improve the league and when it does everyone, including the FAI, will start to benefit.”

There has been a mixed response to the document entitled: “Pathway to International and Domestic Football Success – The future of the League of Ireland”. Some clubs have been supportive and others have found some positives in it but most of the bigger ones reacted poorly to his proposal for a 16 team, single division league with direct links (promotion/relegation) to the provincial leagues below. Burke, however, says that he is not hung up in the slightest on any one proposal. “What I’ve done is simply put something out there for discussion,” he says. “What the clubs do with it after that is up to them.”

Burke’s document was compiled in July, and he argues against the Conroy Report’s central recommendation that the league return to a 10 team top flight with a midseason split. Given the PCA’s general indication of support for the reduced number, though, that seems likely to get the green light this evening.

Additional funding on anything like the sort of scale Burke envisages is rather less likely to be included in any board recommendations given that neither of the reports the FAI actually paid for itself, calls for it.

Much greater engagement by the association remains a key goal for clubs at every level, though, with many still clearly unhappy about the way they are being treated. It is something Michael Cush is said still to be striving for in his talks with the association but the clubs appear not to have helped themselves by failing to achieve a more unified approach. And so, while the big clubs seem set to win on a key issue, one spokesperson for a first division outfit, while effectively resigned to a 10 team top flight, observes a little angrily: “They (the FAI) might at least have formally invited us in to ask us what we thought.”