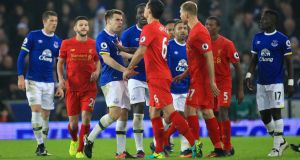 Defender Seamus Coleman admits Everton have to make the most of the spells in games when they are on top.

The Toffees dominated the opening 45 minutes of the 227th Merseyside derby, but all their control was in the area up to Liverpool’s penalty box and they failed to get a shot on target in the first half.

After the break the tide turned and, having missed their opportunity, salt was rubbed into their wounds as Liverpool snatched a 1-0 win deep into eight minutes of added time.

“It would have been great to have gone in at half-time with the lead, but it wasn’t to be,” Coleman told evertontv.

“We had to go back out in the second half and fight and I thought we did well in terms of battling hard, but we didn’t produce enough in the final third.

“I thought we did enough to keep them out, but, unfortunately, it wasn’t to be our night.”

Having come from behind to beat Arsenal in their previous match there was a real hope Ronald Koeman’s side could kick on, but the end of an unbeaten home league record stretching back to April means they have to regroup.

“We’ve got a busy Christmas period coming up and the Premier League waits for nobody,” Coleman added.

“We’ve got to dust ourselves down and go again.”

Everton face further disruption as midfielder James McCarthy and goalkeeper Maarten Stekelenburg look set to be out for at least some of the festive period.

McCarthy was forced off at half-time with a hamstring problem, while Stekelenburg had to be replaced after getting injured in a collision with team-mate Leighton Baines.

Both will be assessed on Tuesday, but the Boxing Day trip to Leicester may come too soon for both.

“James played well in the first 45 minutes, but he was not sure about his hamstring and we couldn’t take that risk,” Koeman said.

“With the goalkeeper, it is always a difficult situation.

“We need to recover now. We’ve had a big, intensive game and we will prepare and see which players are available and, in particular, the fitness of both of those players.”