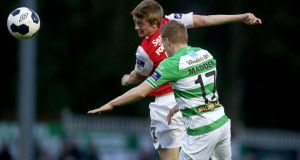 St Pat’s Chris Forrester in action against Simon Madden of Shamrock Rovers. Forrester received the SSE Airtricity/SWAI Player of the Month for April during which the midfielder scored five goals. Photo: Donall Farmer/Inpho

Cork City could probably do without him continuing the run this evening as they try to bounce back from last week’s hammering in Dundalk. Cork manager John Caulfield admitted that his players simply hadn’t been “at the races”.

The key for Cork now is that there is no repeat at Richmond against a side that beat them twice last year and only lost the other game after the title had been secured. Of more immediate concern is the fact that the Dubliners have scored 17 goals in the six league games played since they were heavily beaten themselves by Dundalk.

The visitors will again be without Danny Morrissey and Michael Rafter while their hosts are missing Derek Foran and Mark Quigley. Ken Oman, is fit again for St Pat’s though.

Shamrock Rovers head to the Brandywell without ex- Derry striker Eamon Zayed who is ruled out by an elbow injury while Ronan Finn is back from suspension but faces a late fitness test. Roddy Collins has Rory Patterson suspended following his sending off last week. It will be interesting to see if Collins adopts a more adventurous approach tonight than the one the Dubliner opted for when his side faced Rovers in Tallaght in a pretty grim clash on the opening weekend of the season.

Bohemians are seeking a first home league win when they entertain UCD. The students have picked up of late with last week’s win over Drogheda likely to have greatly increased confidence levels.

Bohs boss Own Heary is taking nothing for granted.

“UCD have very good players – some of the best young players in the league . . you can never write them off,” he said.

Jake Hyland comes into the reckoning after scoring twice in the EA Sports Cup in midweek and Anto Murphy is available. Dinny Corcoran is suspended, Aidan Price is injured and Paddy Kavanagh is a fitness doubt . UCD will be without Ayman Ben Mohamed and Dean Clarke.

Bray will have Danny O’Connor, Shane Byrne, Adam Hanlon and Eric McGill back but Shane O’Connor and Jake Kelly miss out on the visit of Limerick who have Robbie Williams and Barry Ryan suspended. Waterford United who take on Shelbourne have struck a deal with their players to reduce costs.